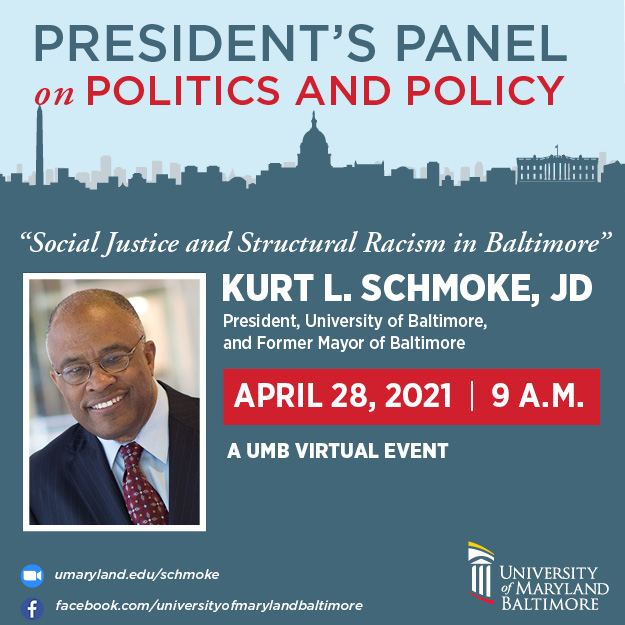 Read about previous panels at umaryland.edu/politics-panel.

Kurt L. Schmoke, JD, a former three-term mayor of Baltimore, was appointed the eighth president of the University of Baltimore (UB) in July 2014. Before joining UB, he was dean of the Howard University School of Law in Washington, D.C., from 2003 to 2012, then was appointed general counsel and served as the institution’s interim provost.

Schmoke was the State’s Attorney for Baltimore City from 1982 to 1987, then became the first African American elected as Baltimore’s mayor, serving from 1987 to 1999. During his mayoral term, he initiated a number of programs in the areas of housing, education, public health and economic development. In 1992, President George H.W. Bush awarded Schmoke the National Literacy Award for his efforts to promote adult literacy. In 1994, President Bill Clinton praised his programs to improve public housing and enhance community economic development.

Schmoke’s other public service includes an appointment as assistant director of the White House domestic policy staff under President Jimmy Carter in 1977 and a stint as an Assistant U.S. Attorney for the District of Maryland from 1978 to 1981.

After his time as mayor, Schmoke returned to the practice of law as a partner with Wilmer, Cutler and Pickering. He became active with the American Bar Association and the National Bar Association, serving a term as chair of ABA’s Council on Racial and Ethnic Justice. He also has provided countless hours of pro bono legal services to charitable organizations such as the Children’s Health Forum, a nonprofit established to combat lead poisoning among the nation’s youth.

During his tenure at Howard University School of Law, Schmoke focused much of his attention on increasing bar passage rates and expanding the clinical law program to emphasize matters of environmental justice, fair housing, and civil rights.

Schmoke earned his undergraduate degree in history from Yale University. He pursued graduate studies on a Rhodes Scholarship at Oxford University in England and earned his Juris Doctor degree from Harvard Law School. He is married to Patricia L. Schmoke, MD, an ophthalmologist, and they have two adult children.