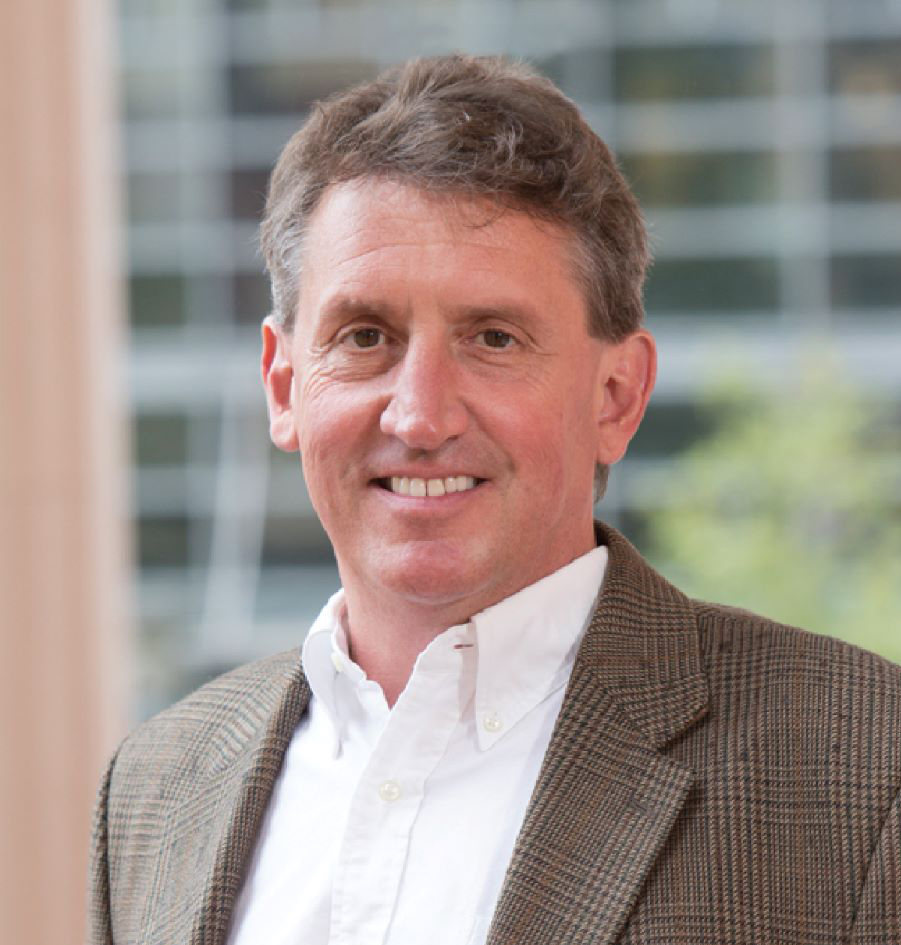 Alexander MacKerell, PhD, the Grollman-Glick Professor of Pharmaceutical Sciences and director of the Computer-Aided Drug Design (CADD) Center at the University of Maryland School of Pharmacy, has been honored by the American Chemical Society (ACS) with its 2022 Award for Computers in Chemical and Pharmaceutical Research.

The award recognizes and encourages the use of computers in the advancement of the chemical and biological sciences. MacKerell’s primary, long-term research focuses on empirical force fields — mathematical models used to calculate the energy and forces acting on chemicals.

“The range of chemicals is quite large including biological molecules, such as proteins, nucleic acids, and lipids, as well as organic chemicals including druglike molecules,” MacKerell said. “These models are essential for computational methods such as molecular modeling and molecular dynamics simulations that are used to understand how molecules perform their biological and chemical functions.”

He added these models are widely used in CADD and by computational chemists and biophysicists on an international level.

Another focus of MacKerell’s research is the development of novel CADD methods, including the Site Identification by Ligand Competitive Saturation (SILCS) technology. The technology is used in the discovery of new compounds that can potentially be developed into drugs, optimization of compounds to make them more druglike, and the development of biologics — protein-based drugs such as monoclonal antibodies — to make them easier to deliver to patients.

The SILCS technology has been licensed from the University of Maryland, Baltimore (UMB) and is the basis for MacKerell’s startup company, SilcsBio, LLC, which supplies software and CADD services to the pharmaceutical industry. MacKerell is a co-founder and chief scientific officer.

MacKerell said the ACS award is “a wonderful acknowledgment” and “indicates the appreciation of the utility of the computational chemistry tools we have contributed.”

“Dr. MacKerell’s contributions in the development of new platforms and software for the advancement of computer-aided drug design have been extensive. This expertise combined with his impressive and extensive scientific collaborations have accelerated drug design in many areas including cancer, infectious disease, and drug addiction,” she said. “Dr. MacKerell has been instrumental in advancing and commercializing new drug entities here at UMB through numerous collaborations that without his input would not have been possible. His impact on computer-aided drug design extends well beyond the boundaries of UMB where his expertise is sought out by scientists here in the U.S. and around the world.”

MacKerell said the award recognizes the important work being done with CADD by the scientific community, adding that computational approaches have two advantages.

“First, they reveal a level of information that is often not accessible through normal observations or experimental studies. This allows us to gain a better understanding of the world around us. In the case of chemistry and pharmaceutical sciences, this allows for atomic details of the way that molecules, including drugs, work to be revealed,” he said.

“Second, they allow for predictions to be made that can help make decisions on how to proceed when addressing a specific problem. For example, CADD identifies the best possible ways to change the structure of a molecule to make it more druglike, thereby limiting the number of molecules that need to be synthesized and experimentally tested. This leads to drugs being brought into the clinic faster and at lower costs.”

MacKerell’s empirical force field work is continuing as he works on developing a model — the Drude polarizable force field — that more accurately treats the electrostatic interaction between molecules.

“This is quite tedious work, and development of the new model has been ongoing for over 20 years,” he said.

He is also studying RNA, proteins, carbohydrates, and the immune system.

“We are performing studies on how proteins involved in the immune system, such as antibodies, interact with other proteins in their environment through carbohydrates,” he said. “Such interactions impact the effectiveness of antibodies in producing an immune response.”

In addition, he said, “we are working on developing methods to better understand the structural and dynamical properties of RNAs, which represent emerging drug targets for future CADD efforts.”

MacKerell plans to attend the ACS conference in San Diego in March to receive his award. He thanked UMSOP, UMB, and his colleagues for their support.

“An important aspect of the research environment here is the highly collaborative nature of my colleagues,” said MacKerell, who pointed out that the CADD Center is collaborating with other scientists at UMB to develop antivirals for the treatment of COVID-19 and other viral infections. “Being a faculty member at the School of Pharmacy and UMB has given me the opportunities and resources to successfully move long-term projects ahead as well as explore new areas of research that have allowed me to grow as a scientist and faculty member.”