Face to Face: The Impact of Overturning Roe v. Wade 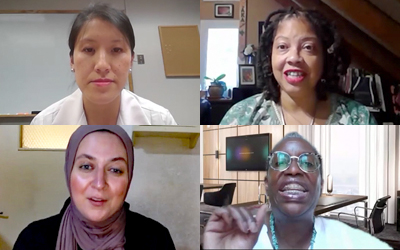 Does Maryland expect to see an influx of out-of-state patients seeking an abortion and how is the state preparing to intake them? Does the University intend to advocate for the training of abortion providers? How does overturning Roe v. Wade affect IVF, medication abortion, and access to contraception?

These are just three of dozens of questions posed by the virtual audience of Virtual Face to Face with President Bruce Jarrell on June 29. The host, University of Maryland, Baltimore (UMB) President Bruce E. Jarrell, MD, FACS, enlisted the expertise of four faculty experts to help explain the impact on women’s health of the Supreme Court’s recent ruling that overturned the landmark Roe v. Wade decision, returning control of abortion rights back to state legislatures after 49 years.

Existing laws and so-called “trigger laws” made abortion illegal in seven states almost immediately. That number will jump to 16 very soon, although legal challenges may slow things down a bit. Six more states will implement laws that impose restrictions, banning abortion in some cases after just six weeks of pregnancy. And a handful of others are already becoming battlegrounds for state legislatures, including Michigan and Pennsylvania. All told, in the near future, 26 of the 50 states may impose strong restrictions or outright bans on abortion.

Of course, we can’t know the full impact yet, but there’s plenty of evidence that the impact is going to be widespread and manifold and will disproportionately affect women of color — Black women in particular who already often suffer from an array of issues stemming from long-term, structural racism, such as poorer health conditions, lower incomes, and a lack of health insurance and access to good health care, including prenatal health care.

The Centers for Disease Control and Prevention says Black women are four times as likely to seek an abortion as white women, and Black people are a larger part of the population of most of the states that have banned or are set to ban abortions. The Kaiser Family Foundation points out that in Mississippi, for example, Black residents make up 38 percent of the population, compared with 13 percent of the national population. As a result, Black women account for about three-quarters of the abortions in that state.

Unfortunately, many of the states moving to ban abortion also have the fewest social services available for mothers in poverty. The Census Bureau says Texas has the largest percentage of women who receive no prenatal care in their first trimester and Mississippi has the highest percentage of children living in poverty and lowest birthweights.

“Jessica, put yourself in the practicing OB [obstetrician], you’re practicing in a state like Mississippi which has banned abortion, what are the one or two medical situations that would pose a high risk to the pregnant woman that you might encounter?” Jarrell asked panelist Jessica Lee, MD, assistant professor in the University of Maryland School of Medicine and director of the Ryan Residency Program in Abortion and Family Planning. “And how would you deal with that situation today in Mississippi as opposed to two weeks ago? Give us some insight into your medical thinking.”

Lee explained that several life-threatening conditions might occur that would cause a physician and patient to consider abortion to protect the health of a pregnant woman.

“Another common condition that can affect patients early in pregnancy is preeclampsia,” Lee explained, “which is a blood pressure disorder of pregnancy. The cure for that is also removal of the pregnancy or delivery of that pregnancy. And I've seen patients even here in Maryland, who developed the life-threatening version of preeclampsia, in which they actually lose their ability even to clot their blood. And at that point, we definitely recommend delivery or termination to save their life.”

“I would see my colleagues being faced with a very difficult decision on when they can intervene,” she added. “I know my colleagues are struggling with worrying about being sued or being prosecuted if they intervene too early. Did they not show that the maternal health was at risk enough to perform this abortion? I see it becoming very sticky to uphold our duty to take care of our patients if we're worried about the law hanging over our heads.”