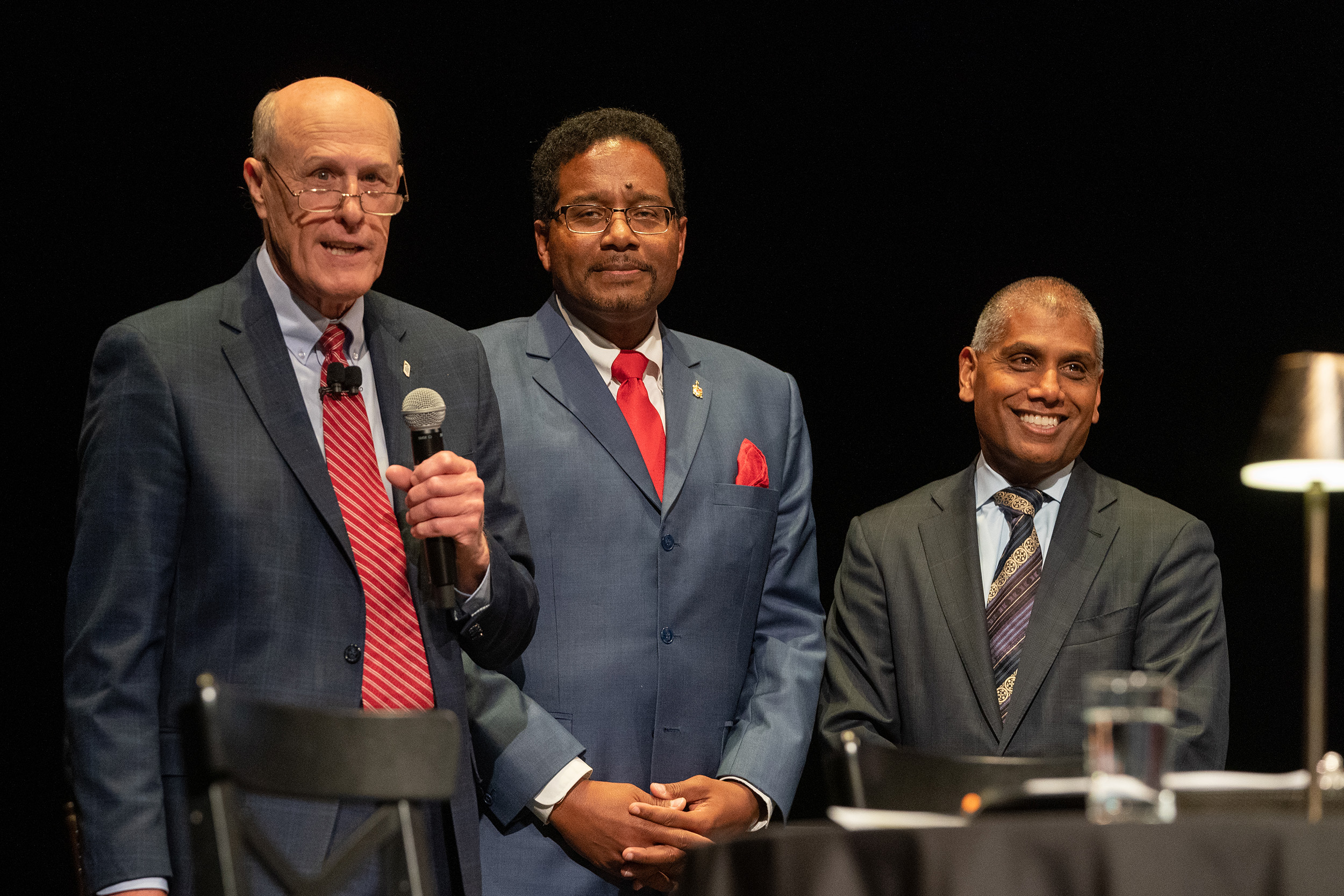 President Bruce Jarrell affirms his commitment to Baltimore and thanks the UMB community for fulfilling the University’s mission amid adversity while positioning it for future success.

University of Maryland, Baltimore (UMB) President Bruce E. Jarrell, MD, FACS, presided over a unique and entertaining State of the University Address on Nov. 9 at the Hippodrome Theatre, alternately delivering his speech and working the room to elicit insights from the “party” guests who joined him on stage at the historic venue.

“Over the past couple of years, we’ve accomplished a lot,” Jarrell told the crowd of about 600 from the UMB community, referring to the University’s resilience and response to challenges from the COVID-19 pandemic, racial unrest, and political upheaval. “I’m here to tell you that the state of our University is strong. And it is you — all of us — who make it so: the UMB team, every member, every partner, and every friend that we have.

“You might ask, why does it look like we’re having a party on stage? Because I thought it was important to have a party,” he said. “Think about the accomplishments you in the audience and we on stage have had in the past several years. What you’ve done is inspiring — and you’ve all earned the right to be in the limelight.”

(Watch the State of the University Address in the video below.)

Jarrell described how UMB, amid all the challenges, continued to fulfill its mission to improve the human condition and serve the public good of Maryland and society at large. He noted that UMB is now home to a fully accredited physician assistant program, hired four new deans, created offices focused on diversity and sustainability, established a new set of core values, and developed a child care grant program. He touted faculty development efforts led by the Faculty Center for Teaching and Learning, launched in 2019, and Leaders in Education: Academy of Presidential Scholars, launched this year.

“These achievements have happened because everybody pulled together — faculty, staff, and students,” he said. “The past several years have been really trying, and many distractions and obstacles have been put in our way. But we have not faltered, we have flourished.”

Jarrell also emphasized UMB’s commitment to Baltimore on three fronts: improving community health outcomes through an upcoming collaboration with the University of Maryland Medical Center, promoting economic growth in several ways including providing financial and administrative services to nonprofits, and giving youths opportunities to succeed and be safe via initiatives like the CURE Scholars Program and the new Center for Violence Prevention.

“Baltimore will thrive when its youth thrive,” he said. “But its youth need to have hope for the future, and we should be aiming to bring hope to our youth — hope that they have a future. But many of our youth live in violent communities, and we must be attentive as a university to this violence. It’s our problem, too, and that’s why we started the Center for Violence Prevention.”

UMB deans, vice presidents, and University System of Maryland Chancellor Jay A. Perman, MD, were among the 30 guests sitting at tables on stage with Jarrell. So were the UMB Founders Week award winners and Catalyst for Excellence recipients, who all were honored before the speech in a ceremony led by Roger J. Ward, EdD, JD, MSL, MPA, provost, executive vice president, and dean of the Graduate School.

Jarrell handed off the microphone to a series of guests to contribute their thoughts, starting with Mohan Suntha, MD, president and CEO, University of Maryland Medical System (UMMS), and Darryll J. Pines, PhD, MS, president, University of Maryland, College Park (UMCP), who talked about their collaborations with UMB. In fact, Jarrell noted that UMB and UMCP, through their MPowering the State (MPower) partnership, would be launching a new initiative the next day with UMMS and Montgomery County, Md., as partners, too.

A $65 million project that includes $25 million in initial funding from MPower, the University of Maryland 3 - Institute for Health Computing (UM-3-IHC) will be located in North Bethesda and charged with leveraging recent advances in artificial intelligence and computing to create a premier learning health care system that evaluates both de-identified and secure digitized medical health data to diagnose, prevent, and treat diseases in patients across Maryland.

“I’m going to predict that new science will emerge from this powerful new institute, and I’m certain that new ideas about patient care will emerge,” Jarrell said. “I’m equally sure that in the end, we will learn more about other important health topics such as the social determinants of health.”

Jarrell announced that UMB’s Catalyst Campaign, launched in 2017, had surpassed its fundraising goal of $750 million, hitting $778 million as of Oct. 31. Also on the philanthropy front, he and Kirschling thanked the Conways for their $13.83 million pledge to UMSON in December 2020, the largest philanthropic gift in school history. With that pledge and other donations, the dean said the Conways will have funded scholarships for 830 nursing students to cover in-state tuition, fees, and books.

The event also featured seven instrumental interludes from cellist Lachezar Kostov, MM, of the Baltimore Symphony Orchestra, who opened with a piece from the 1970 movie “M*A*S*H” that was popularized as the theme song from the acclaimed TV show of the same name. “M*A*S*H,” which stands for Mobile Army Surgical Hospital, was about U.S. doctors, nurses, and support staff and their struggles during the Korean War in the early 1950s.

Speaking after Kostov’s musical intro, Jarrell said he saw the movie as a student at Jefferson Medical College in Philadelphia — and it made an impact about the terrors of war. Later in his career as a surgeon, he learned that U.S. military surgeons, frustrated with having to perform so many amputations, made innovations during the war designed to save the legs of wounded service members. These advances led to a decrease in the rate of amputations from 50 percent to 7 percent, and essentially launched the discipline of vascular surgery, he said.

”Like the surgeons in Korea, we have the choice before us as well: Do we just accept the result, the current state of affairs, shrug our shoulders, and move on? Or do we push back and ask the question, ‘Isn’t there a better way to do this?’ I think there is a better way to do this. And I expect to see great breakthroughs in health sciences, leaps in education and teaching, and progress in our social sciences toward curing social injustice and health inequities.

“Like those surgeons in Korea, we will see the impact directly on people’s lives, and we will feel joy when we move forward and make progress. So, yes, the state of our University is strong today. And our University’s future will be even stronger tomorrow.”