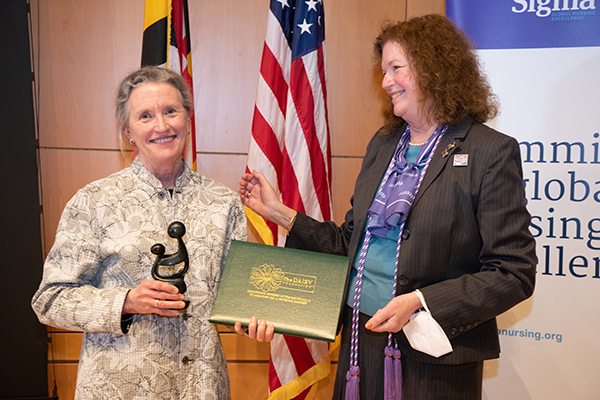 During the spring induction ceremony for UMSON’s Pi at-Large Chapter of Sigma, Jane M. Kirschling, PhD, RN, FAAN, was honored with a surprise presentation of the DAISY Nurse Leader Award.

An acronym for Diseases Attacking the Immune SYstem, The DAISY Foundation was formed in November 1999 by the family of J. Patrick Barnes, who died at age 33 of complications of Idiopathic Thrombocytopenic Purpura. The nursing care Patrick received when hospitalized profoundly touched his family. The founded the DAISY Foundation specifically to say “thank you” to nurses.

During the presentation of the award, Sweeney described challenges the chapter faced when she first became president in 2019, compounded by the onset of the pandemic. “With Dr. Kirschling’s ‘virtual’ arm around my shoulders, I never felt that I was standing alone and never had to ask for anything,” Sweeney said in her remarks. “It was magical in that whatever the chapter needed to be successful, it was made available. She was generous in sharing resources and wisdom through her amazing staff. She supported the chapter as we learned to quickly pivot.

“Sigma, Theta, Tau = Love, Honor, and Courage are the words that make up the name of our nursing honor society. They also describe how Dr. Kirschling approaches her leadership and the example that she sets.”

Kirschling received a special DAISY Nurse Leader certificate, a specially designed DAISY recognition pin, and the Healer’s Touch sculpture. Each sculpture is hand carved by artists of Zimbabwe’s Shona Tribe, which holds its healers in a position of great importance to the community. The DAISY Foundation supports 14 artists carving these sculptures; this is their only work, and with the money the Foundation pays, some 500 people in the artists’ extended families are supported.