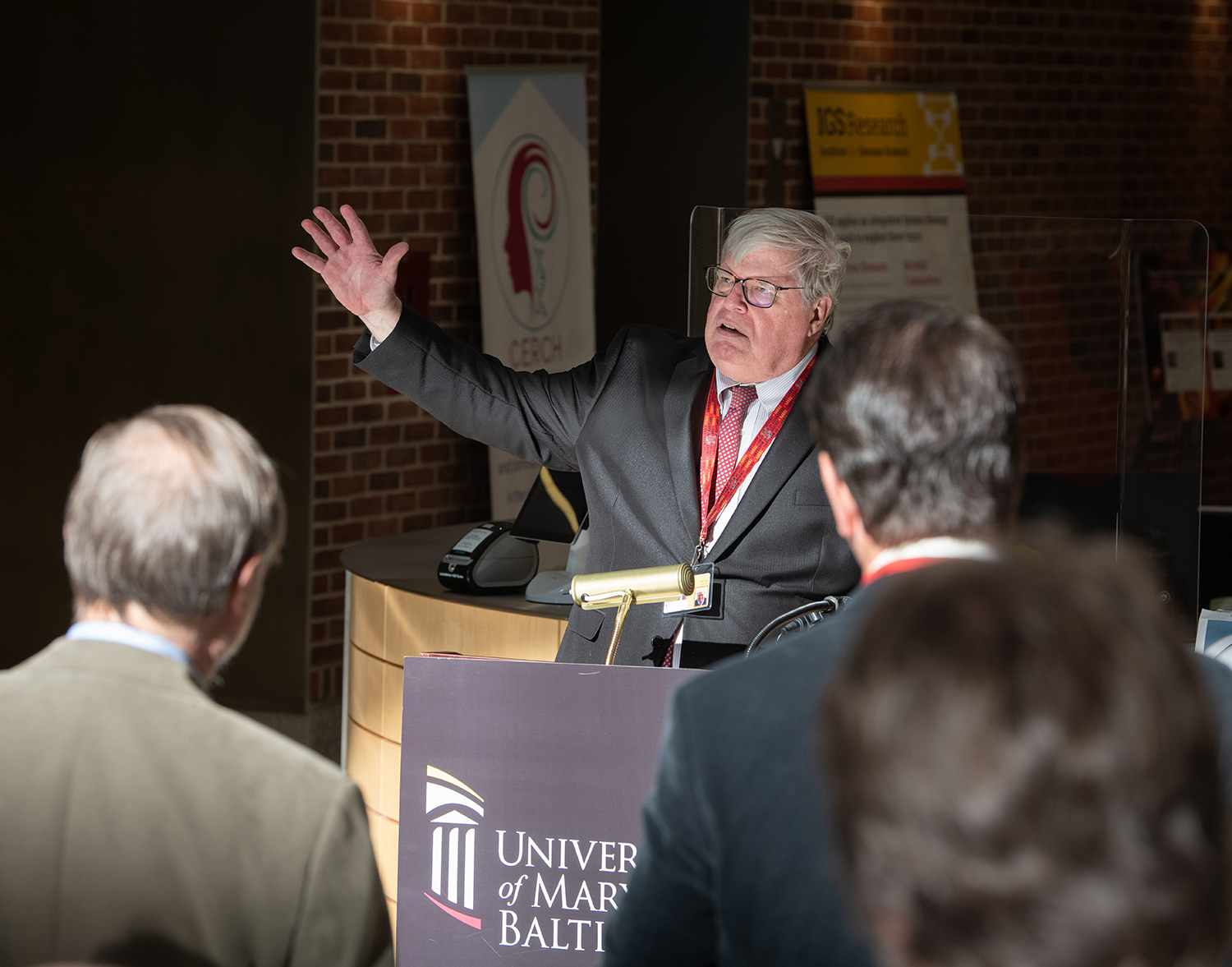 Gregory F. Ball, PhD, says he’s looking to “bring out the best at both campuses” in the research collaboration between UMB and the University of Maryland, College Park.

Ball, who started his job as vice president for research of UMB/UMCP on Feb. 1, was the guest of honor at a UMB reception April 27 at Health Sciences Research Facility III. The event was hosted by President Bruce E. Jarrell, MD, FACS, and attracted a crowd of 40 including four UMB deans, faculty members/researchers, and other University leaders.

“I’m very excited to have the opportunity to lead this impressive research enterprise,” said Ball, whose wife is Margaret “Peg” McCarthy, PhD, MA, the James and Carolyn Frenkil Dean’s Professor and chair of the Department of Pharmacology at the University of Maryland School of Medicine. “I’ve met a lot of people as a spouse over the years, and that’s a very helpful start. I’m looking forward to meeting more of you and working with you so that we can continue to make an impact for the state of Maryland.”

In his introductory remarks, Jarrell noted that the vice president’s role was created in 2018 as a way to further leverage the complementary research activities of UMB and UMCP. It also allowed the universities to report their research and development (R&D) spending as one entity for the National Science Foundation’s (NSF) Higher Education Research and Development (HERD) survey. In Fiscal Year 2020, the UMB/UMCP enterprise ranked 10th among public universities and 16th overall with $1.1 billion in R&D expenditures.

“Creating the vice president for research position was critical to the success of the UMB/UMCP collaboration,” said Jarrell, who joined with UMCP President Darryll J. Pines, PhD, MS, to appoint Ball to the job, which carries a three-year term. “When I first saw that number in print — $1.1 billion — I said, ‘That’s an impressive accomplishment!’ I was very happy and excited about it. I’m also excited to welcome Dr. Ball. He is an experienced and accomplished investigator. He is a pleasure to work with and is already heavily involved in several research projects that I hope will come to fruition soon.”

Ball replaced Laurie Locascio, PhD, MSc, who recently was confirmed by the U.S. Senate as undersecretary for standards and technology in the Department of Commerce and director of the National Institute of Standards and Technology. Amitabh Varshney, PhD, MS, dean of the College of Computer, Mathematical, and Natural Sciences at UMCP, served as interim vice president for three months.

For the previous seven years, Ball was dean of UMCP’s College of Behavioral and Social Sciences, a large and academically complex college with more than 5,000 undergraduate students and more than 800 master’s and doctoral students across 10 departments and multiple centers. During his tenure, he focused on modernizing research training by promoting the adoption of new methods in data science and expanding experiential learning opportunities and career preparation services for all students in the college.

He also maintained an active research lab in the UMCP Department of Psychology. His research examines adult neuroplasticity by studying seasonal changes in brain and behavior in songbirds to understand how hormones and various environmental stimuli regulate these seasonal brain changes. At the April 27 event, he treated the attendees to his mimic of a laughing gull, a bird he said is commonly found on the Eastern Shore of Maryland, then discussed his new role.

“I’m delighted to be here,” Ball said, noting that the UMB/UMCP research collaboration is an outgrowth of the University of Maryland Strategic Partnership: MPowering the State initiative, which was launched in 2012 and formalized by the Maryland General Assembly in 2016. “This is a great opportunity for the two universities to continue working together. There are many, many areas where we can work together productively, and work together much more effectively, to bring out the best at both campuses. And research is clearly one of those areas.”

In addition to the HERD survey, Ball said NSF recently conducted a survey of all federal funding for research and development in the United States that showed two states alone at the top: California and Maryland.

“No other states were even close,” Ball said. “What this shows is that we have an incredible research ecosystem in Maryland that is truly special. And that ecosystem has many different parts to it that we can leverage. So we need to be thinking about a wide range of possible research collaborations from the social sciences to the many aspects of biomedicine. The future of academic medicine is bright, allowing us to address clinical problems and translational problems and then harness new science to make new applications that can transform how medicine is experienced and delivered.”