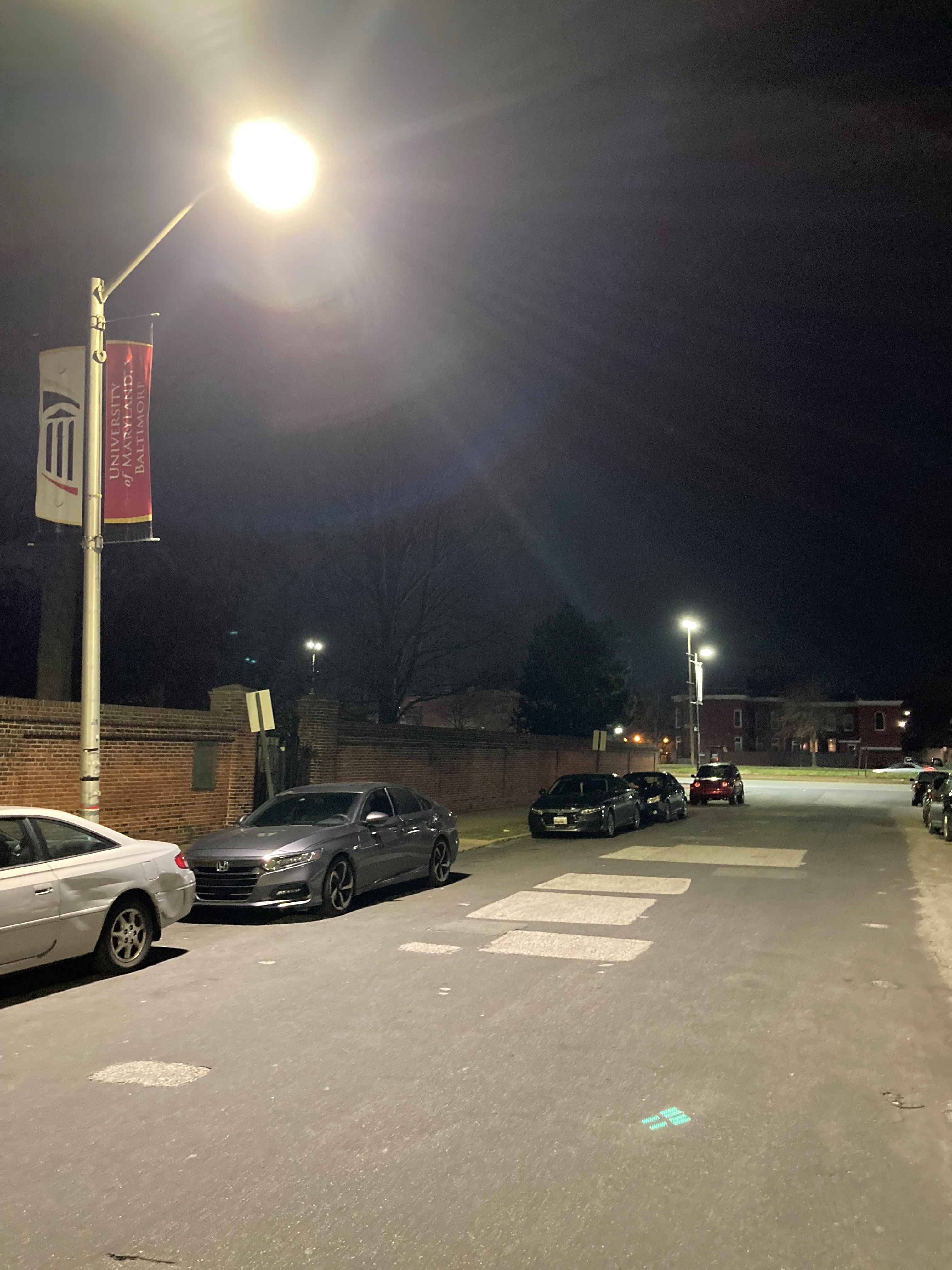 The UMB Police Department and Parking and Transportation Services work together to replace 167 lights on campus.

Let there be light!

One hundred and sixty-seven streetlights are shining brightly on campus thanks to the University of Maryland, Baltimore (UMB) Police Department and UMB Parking and Transportation Services (PTS), following more than two years of discussions about dim street lighting at UMB.

“Emily and Niv told us some students would work and study on campus late at night, but there were entire areas of campus that were dark,” Milner said.

The lights, which belong to Baltimore City, clearly needed to be updated. UMB began discussing the lighting improvements with the Baltimore City Department of Transportation in late 2019. Partners from UMB Facilities and Operations, University of Maryland BioPark, Downtown Partnership, and the Lexington Market Merchants Association supported the project, but it stalled during the pandemic. UMB persevered, and in September and October 2021, 75 HPS lights were replaced with white LED lights along Martin Luther King Jr. Boulevard from Pratt Street to Saratoga Street.

“Once daylight saving time ends in November, many of our community members leave while it’s dark outside,” Leone said. “Replacing the MLK lights was a great start, but there was more work to be done.”

By mid-February 2022, streetlights at UMB started being replaced with LED bulbs. The project was completed in early March. The result was not only brighter, safer streets, but also more energy-efficient lighting. The LED bulbs use 40 percent to 75 percent less electricity than a HPS fixture.

“This project shows that we can achieve our goals in a sustainable way,” said Anna Borgerding, MA, director of operational excellence and sustainability. “Not only do these new lights improve visibility and safety at UMB, but we worked with our Baltimore City partners to come to an energy-efficient, environmentally friendly solution. Our University is living our core value of well-being and sustainability by supporting these efforts here on campus and beyond.”

UMB students, faculty, and staff have already noticed the improvement. Daveen Barnes works for PTS and is stationed at the Lexington Garage during the evening shift. She attended a public safety meeting in December 2021 to express her concerns about lighting at UMB.

“It used to get very dark late at night and early in the morning, but the new lighting makes such a difference!” Barnes said. “The police officers are always [in front of the Saratoga Building] late at night. I feel much safer, and our customers do, too. I’m so appreciative to Robert and Chief.”

Milner and Leone are grateful to the partners who helped make this lighting project a success. “We heard our students’ concerns, and we made this project a priority,” Leone said. “For our faculty, staff, and students who work and learn on campus after dark, these 167 LED lights make a big difference.”