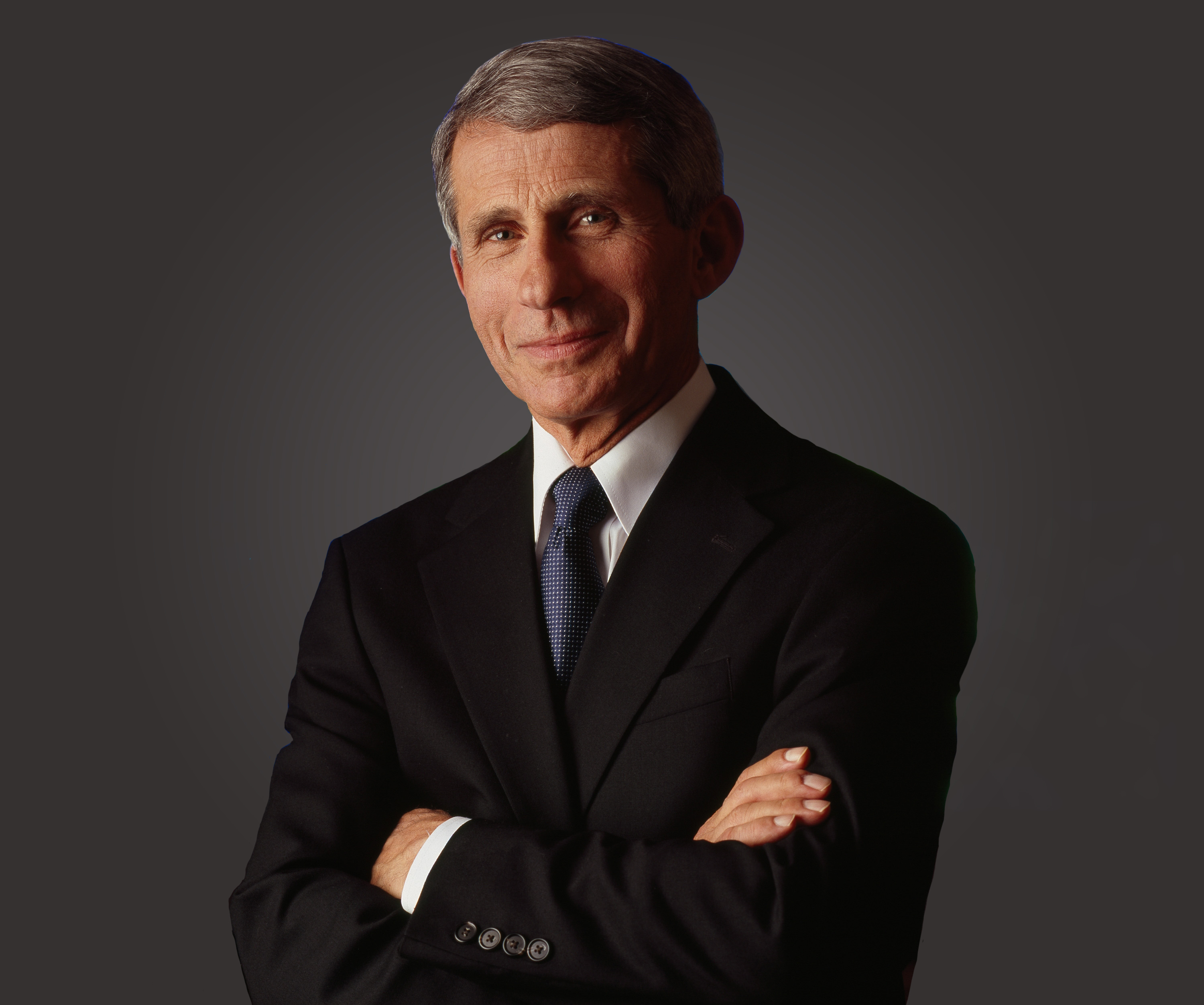 Director of National Institute of Allergy and Infectious Diseases and chief medical advisor to President Biden also will receive an Honorary Doctor of Public Service degree from the University.

In assessing the long and distinguished medical and scientific career of Anthony Fauci, MD, it’s difficult to pick just one accomplishment as being the most impactful.

Groundbreaking research that led to the creation of drugs and therapies to fight HIV, the virus that causes AIDS? Development of the President’s Emergency Plan for AIDS Relief, a program that has saved over 20 million lives throughout the developing world? Serving as director of the National Institute of Allergy and Infectious Diseases (NIAID) for 38 years? Advising seven U.S. presidents on emerging and infectious diseases such as COVID-19?

Fauci, who will deliver the keynote speech at the University of Maryland, Baltimore’s (UMB) 2022 commencement ceremony May 19, is proud of them all — but perhaps a bit partial to his and his institute’s work on the AIDS epidemic.

“I have worn a number of hats in my career,” said Fauci, who in addition to leading NIAID is the chief medical advisor to President Joe Biden. “Early in my career as a basic scientist, I helped to develop effective therapies for a number of formerly fatal inflammatory diseases. In the 1980s, I changed the direction of my research to focus predominantly on HIV and became the director of NIAID.

“I think that is the most profound of my accomplishments: I started the AIDS program at NIAID, and the institute has played a major role in developing and testing most of the therapies that wound up saving literally millions of lives. NIAID-funded scientists at medical centers in the U.S. and around the world have been the prime movers in the extraordinary advances against HIV.”

A Wide Portfolio of Research

Fauci has delivered major lectures all over the world and received numerous prestigious awards, including the Presidential Medal of Freedom, the highest honor that can be given to a U.S. civilian, from President George W. Bush in 2008, and the National Medal of Science. He also has received more than 50 honorary degrees from universities in the United States and abroad — UMB will add one to the list May 19 with an Honorary Doctor of Public Service degree.

And to keep it all in the Fauci family, his wife, Christine Grady, PhD, MSN, also will receive an honorary degree from UMB to recognize her public service and achievements as head of the Department of Bioethics at the National Institutes of Health (NIH) Clinical Center. This year’s commencement will be held at Chesapeake Employers Insurance Arena on the campus of the University of Maryland, Baltimore County after two years of virtual Universitywide celebrations.

“For decades, Dr. Fauci has advised the country on domestic and global health threats,” said UMB President Bruce E. Jarrell, MD, FACS. “He has been at the forefront of the battle against COVID-19, serving as a thoughtful and reasonable voice during this crisis, firmly dedicated to putting science first and saving lives not just in the United States, but also around the world.

“We appreciate his service to the country and look forward to his keynote address,” Jarrell added. “Dr. Fauci and Dr. Grady have had such a positive impact on the world, and UMB is thrilled to recognize both of them with honorary degrees.”

Fauci will be in familiar territory May 19. He and NIAID have worked closely with the University of Maryland School of Medicine (UMSOM) and its Center for Vaccine Development and Global Health (CVD) during the pandemic, continuing a long and impactful collaboration.

“One of the main components of NIH-funded vaccinology has been the University of Maryland School of Medicine,” Fauci said. “The scientists there have been at the core of all vaccine studies for decades and decades, and I appreciate the work they’ve done with us in the past and in particular on COVID-19.”

The feeling is mutual, say two leaders from CVD.

“Dr. Fauci’s leadership during the COVID-19 pandemic has been unparalleled,” said Kathleen Neuzil, MD, MPH, FIDSA, the Myron M. Levine, MD, DTPH, Professor of Vaccinology at UMSOM and director of CVD. “He has been steadfast and courageous in advocating for strong science as the foundation for all public health decisions.

“On a personal level, I’ve witnessed his commitment and willingness to listen and engage wherever and whenever his input or his voice was needed,” Neuzil added. “He has truly worked tirelessly during the pandemic, and his efforts have undoubtedly saved millions of lives. We’re privileged that he has agreed to speak at UMB’s commencement and receive an honorary degree. I’m certain that everyone will be inspired by Dr. Fauci.”

Wilbur Chen, MD, MS, professor, Department of Medicine, UMSOM, and chief of the adult clinical studies section at CVD, says Fauci’s work at NIAID inspired him in his own career.

“Dr. Fauci won’t remember having met me in the summers of 1996 and 1997 during my Intramural Research Training Award fellowships, but he compelled me to forge a career path in academic research on infectious diseases through my experience at NIAID,” Chen said.

“Dr. Fauci has given decades of self-sacrificial public service in promoting the advancement of scientific knowledge on a multitude of important infectious diseases,” he added. “Over the past two years, he has been a clear, consistent, and clarion voice for communicating rational public health policy during the COVID-19 pandemic. I look forward to hearing his message to the 2022 graduates of UMB, as I believe his words will be as inspirational as his actions and deeds.”

Pandemic Past, Present, and Future

As for COVID-19, Fauci said the virus isn’t likely to be eradicated and the pandemic is shifting into a stage known as endemicity.

“With endemicity, there will be a low, kind of smoldering level of infection in the community,” Fauci said. “The vulnerable among those who don’t want to get vaccinated, as well as the elderly and people with underlying conditions, will continue to suffer from this pandemic, but it will unlikely continue to disrupt the social order, close down the country, or hurt us further economically.

“We likely will need to get a booster shot every year or every couple of years. Of course, the wild card is that this all remains unpredictable, especially if we get another completely different variant. Because if we do get a brand-new variant, that’s going to require us to move quickly to get a brand-new vaccine.”

Fauci said the rapid development of those COVID-19 vaccines and the messenger RNA (mRNA) technology used to produce two of them (Moderna and Pfizer-BioNTech) will be the scientific legacy of the pandemic.

“The mRNA technology will have a profound impact because we’ve shown that this is a very adaptable platform,” he said. “I think you’re going to start seeing a lot of clinical trials using mRNA for influenza vaccines, for malaria vaccines, for tuberculosis vaccines. It definitely has the possibility of transforming the field of vaccinology.

“The scientific response and approach to the COVID outbreak is really an outstanding success story,” he added. “Having a strong foundation in biomedical research led to the unprecedented feat of developing a safe and effective vaccine literally less than a year from the time the sequence of the virus was published. And it happened because that foundation was built on the investment in basic and clinical research over the decades.”

Read about all of the commencement honorees at this link.