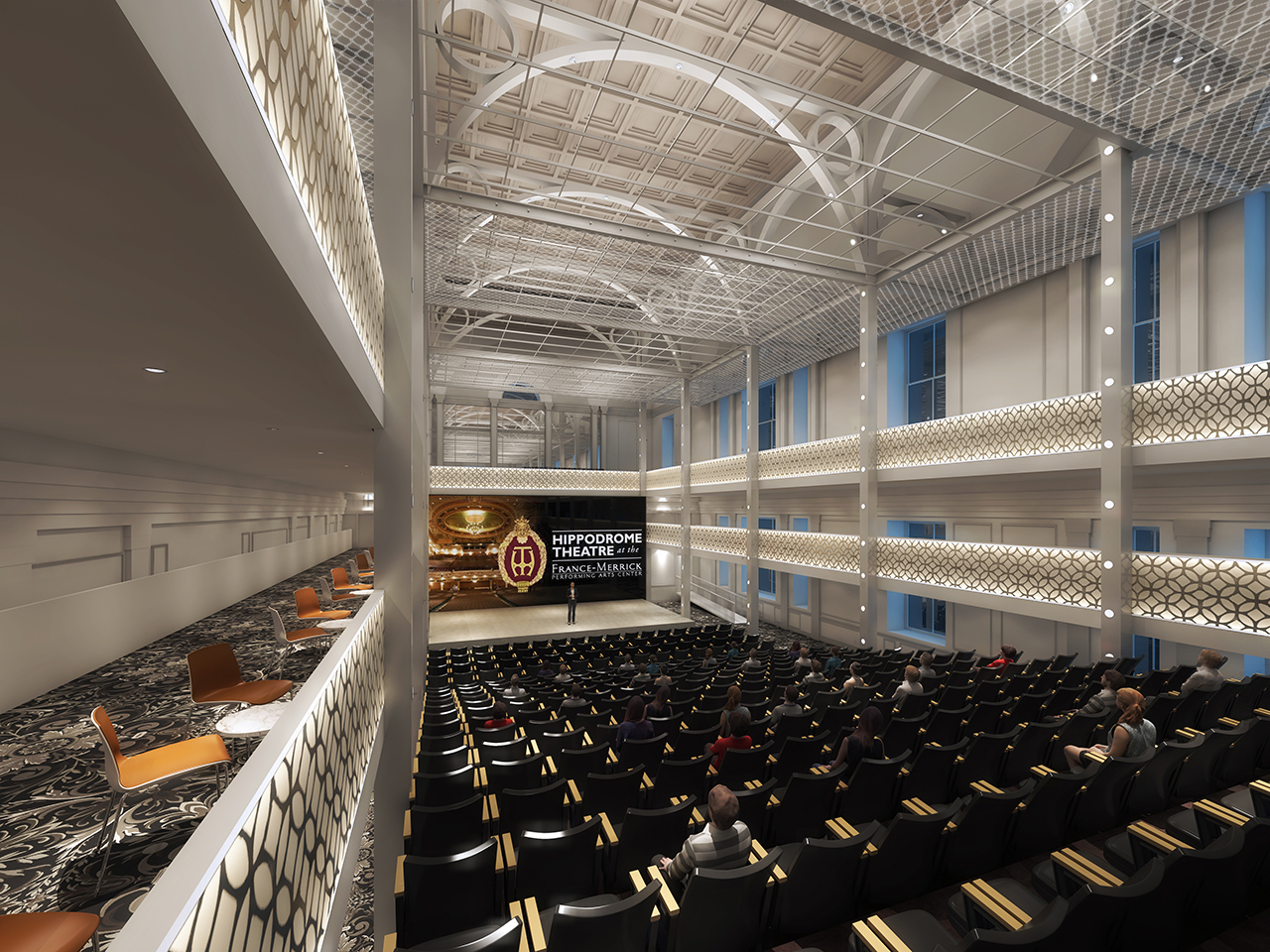 $500,000 from the state of Maryland will aid construction of a venue to host lower-cost entertainment, expanded arts education programming by the Hippodrome Foundation, and other events.

The University of Maryland, Baltimore (UMB) is pitching in to support a next-door neighbor in constructing a venue designed to expand arts education for Maryland youth and increase accessibility and diversity of the performing arts in Baltimore.

In December, UMB received a $500,000 award from the state of Maryland to be used to support the renovation of the Hippodrome Foundation, Inc.’s (HFI) capital project, an $18.6 million renovation of the former Eutaw Savings Bank building on the corner of Fayette and Eutaw streets. The building, part of the France-Merrick Performing Arts Center (FMPAC), is two doors down from the Hippodrome Theatre. The project will create the M&T Bank Exchange, a flexible, state-of-the art venue that will provide more space for arts education programs and a place to host lower-priced entertainment events.

The award came from the Seed Community Development Anchor Institution Fund, part of the Maryland Department of Housing and Community Development’s Fiscal Year 2022 State Revitalization Program Awards. The fund provides anchor institutions with grants or loans to support community development projects and improvements in targeted areas. Nearly $63 million was awarded to 214 projects and activities that promote community development and economic growth in Maryland.

“This is a very exciting project,” said Mary Morris, who wrote the grant application for UMB and is director of the Baltimore Fund in UMB’s Office of Research and Development. “The Seed Community Development grants are available to anchor institutions such as universities and hospitals. The driving force behind this is community revitalization, as UMB works to fulfill its mission to support our West Baltimore neighbors.”

The UMB Foundation also has supported the project, joining the state, the city, and other donors such as the France-Merrick Foundation, John Gore Organization, Abell Foundation, M&T Bank, and Whiting-Turner. Olive Waxter, executive director of HFI, which is the nonprofit arm of FMPAC, said the M&T Bank Exchange, which is the final phase of the Hippodrome complex’s renovation, is expected to be completed in February 2023.

“The Hippodrome Theatre has welcomed up to 300,000 people in any given year for Broadway shows and other one-night entertainment,” Waxter said. “We are so pleased to create a space that will be used for diverse and lower-priced entertainment as well as more free programming and opportunities for the young people we serve.”

HFI is charged with sharing the assets of FMPAC and has a number of programs for community members including Young Critics, which helps youths develop critical writing skills and an appreciation of theater; Camp Hippodrome, which engages middle and high school students with summer workshops on theater, music, dance, and more; and Special Needs, which provides activities for children and adults with disabilities.

The M&T Bank Exchange project emerged out of a two-year feasibility study that concluded there was a substantial need and demand for this type of venue. The renovation will increase the building’s square footage from 5,400 to 12,000 and feature seating capacity, flexibility, and technology that is unique to any space within a 100-mile radius, according to HFI.

The venue will seat 550 to 600 at full capacity, and HFI anticipates it will attract 100,000 more people per year to the FMPAC complex. Events at the new venue also will offer lower ticket prices to welcome the entire community. And a retractable seating system, which is important for event flexibility, will allow the floor level to accommodate table seating and gala-type events.

“The M&T Bank Exchange could host events such as comedians’ tours, smaller-scale plays, and smaller musical performances,” Morris said. “That’s a really important aspect of this project, because it brings more of the local community to the Hippodrome.”

The Eutaw Savings Bank, which was the original name of the M&T Bank Exchange, is adjacent to the Western National Bank building that serves as a lobby area for the Hippodrome. Both buildings were constructed in the 1880s and renovated in the 1910s before being connected in 1989, according to the Maryland Historical Trust. The state of Maryland acquired the buildings and the adjacent Hippodrome Theatre in the 1990s.

“The Eutaw Savings Bank space has been underutilized since 2004, when the France-Merrick Performing Arts Center opened,” Waxter said. “Occasional events have been held there, but because the lights, sound systems, and other equipment had to be brought into the building, the cost to use it was very high. The new space will have all of the accoutrements — lights, sound, chairs, tables, etc. — ready to go without additional cost.”

UMB’s Council for the Arts & Culture partners with HFI to offer students and employees discounted tickets to shows, guided Hippodrome tours, and presentations from theater critics and performers.

Jennifer Litchman, MA, senior vice president for external relations and founder and chair of the Council for the Arts & Culture, said, “Our longstanding partnership with the Hippodrome began over two decades ago when UMB sold the building to the Maryland Stadium Authority [which oversees the Hippodrome] for $1.

“The latest product of our fruitful relationship — the M&T Bank Exchange — will provide our employees, students, and neighbors in the surrounding community with additional options for more reasonably priced cultural offerings, bringing the arts to a larger audience while embracing our values of equity and inclusion.”

Waxter thanked UMB for its partnership on the M&T Bank Exchange project.

“This new venue represents the future of the France-Merrick Performing Arts Center,” she said. “UMB has been a critical partner in making the Hippodrome Theatre a reality, and the Hippodrome Foundation’s Board of Directors is immensely grateful for UMB’s help in securing this grant.”

(In photo: Artist's rendering of the inside of the M&T Bank Exchange, courtest of the Hippodrome Foundation, Inc.)