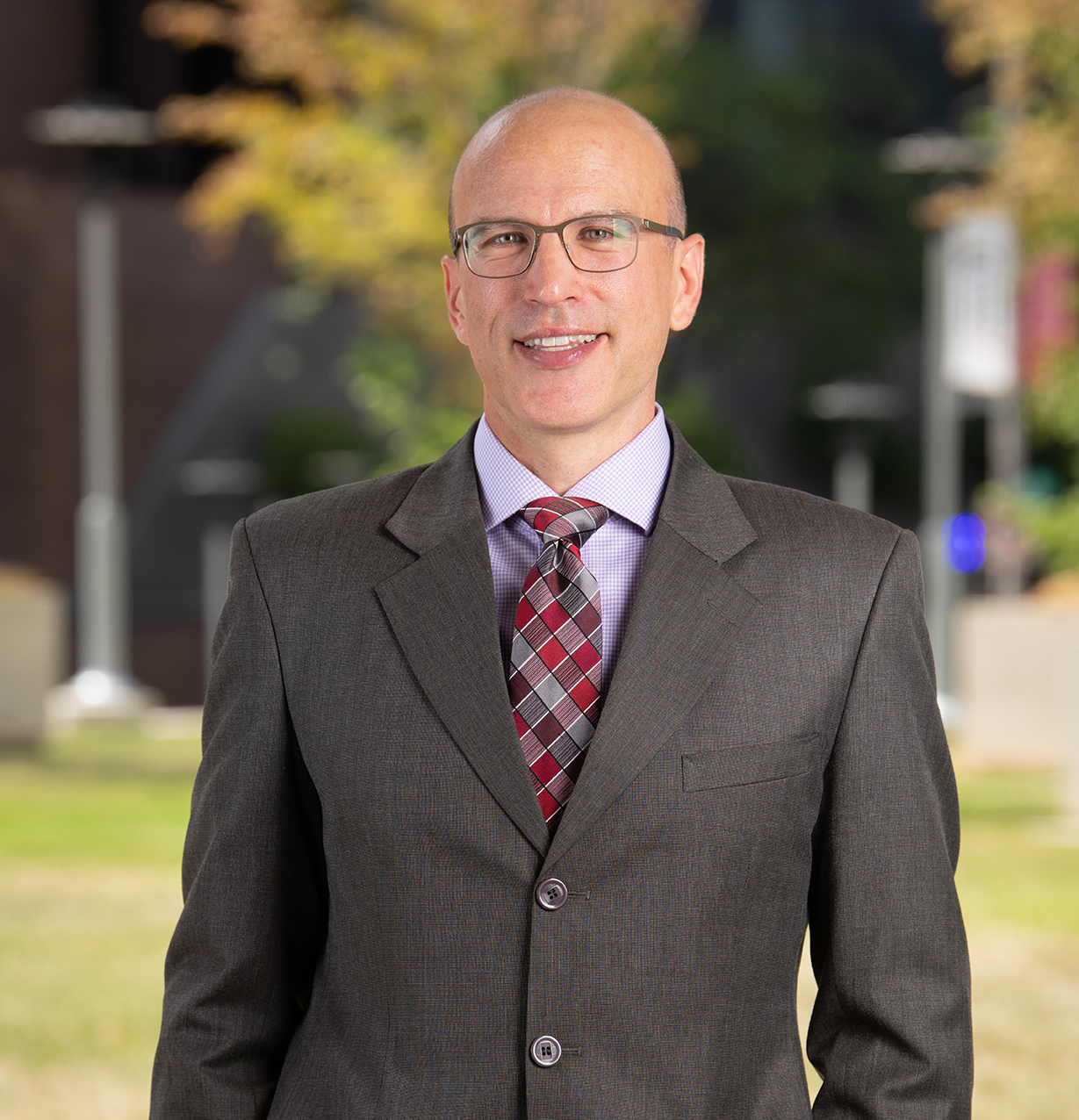 Carey School of Law professor is an expert on the Fourth Amendment who mixes his knowledge of the law with a background in philosophy to deliver impactful scholarship and research.

Every fall, the University of Maryland, Baltimore (UMB) commemorates our rich history and celebrates the future we’re building together during Founders Week, which this year runs Oct. 21-26. Among the highlights is recognizing the extraordinary work of UMB’s faculty and staff with four awards, each signifying outstanding accomplishment in one facet of our mission. Leading up to Founders Week, we will highlight the award winners every Wednesday on The Elm. For more information on UMB’s annual celebration and associated events, please check out the Founders Week website.

David Gray loves what he calls intellectual puzzles. His background as a lawyer and a professor with a degree in philosophy makes him well-suited to research and analyze problems and, most important, find ways to solve them.

“I get a tremendous amount of satisfaction from digging into an argument; pulling it apart; thinking it through by researching relevant law, social science, history, and philosophy; and then constructing my own views in conversation with interlocutors alive today or even long dead,” says Gray, the Jacob A. France Professor of Law at the University of Maryland Francis King Carey School of Law.

“What I love most about my work is that it is driven by contemporary, real-world problems. So I have the privilege of playing with abstract concepts, but with the purpose of addressing immediate questions of social and political justice.”

Gray’s research focuses on criminal law, criminal procedure, constitutional theory, and transitional justice, and he is considered a national expert on the Fourth Amendment, which protects U.S. citizens against unreasonable search and seizure by the government. He has been among the most cited authors from Carey Law since joining the faculty in 2008 and is the author of The Fourth Amendment in an Age of Surveillance, co-author of Get a Running Start: Your Comprehensive Guide to the First Year Curriculum, and co-editor of the Cambridge Handbook of Surveillance Law.

In addition, Gray has published dozens of articles and book chapters in leading journals, is in demand as a speaker at prestigious institutions and conferences, and frequently provides expert commentary for local and national media on topics relating to criminal law, police procedure, and surveillance.

“Dr. Gray is an exceptional researcher and scholar whose work spans multiple disciplines and offers deep theoretical and practical insights,” says Carey Law Dean Donald B. Tobin, JD. “He is widely respected nationally and internationally for his work in the fields of law and philosophy, he has an incredible record of thoughtful scholarship, and his work makes valuable contributions across a number of fields and institutions.”

Gray, who grew up in Blacksburg, Va., says his interest in law began in high school when he joined the policy debate team. He enjoyed spending time in the library doing research, thinking through his arguments, and anticipating what points his opponents might make. As an undergraduate at the University of Virginia, he got involved with the student judiciary committee as a judge and then a counselor.

“I found a lot of meaning in representing clients, so law seemed like a good fit,” Gray says. “But I’d also been taking philosophy and anthropology classes and was particularly interested in questions of political and social justice. I decided to pursue a PhD in philosophy and a degree in law, which would allow me to keep a foot in the world of theory and ideas and a foot in the world of application and practice.”

He has served on the American Philosophical Society’s Law and Philosophy Committee and was elected in 2018 to the American Law Institute, which describes itself as “the leading independent organization in the United States producing scholarly work to clarify, modernize, and otherwise improve the law.” Gray also has been admitted to the Massachusetts, Pennsylvania, and District of Columbia bars.

Michael Pappas, JD, MA, Carey Law’s associate dean for research and faculty development, calls Gray’s contributions to the fields of criminal law and criminal theory “substantial,” noting that the professor has been active in supporting judicial reform efforts in Maryland and has been called upon to assist in the drafting of legislation, testify on legislative proposals, and advocate for specific reforms.

Pappas also points to Gray’s impact internationally as a central figure in humanitarian law and the promotion of transitional justice, which involves the implementation of judicial and nonjudicial measures to redress legacies of human rights abuses in transitions to democracy.

“Dr. Gray has been invited to present this work in a number of international forums and is widely cited by scholars around the world as providing a philosophically complete and coherent theory of transitional justice,” says Pappas, who calls Gray one of the “most elite young scholars of his generation.”

“Dr. Gray’s academic work also bespeaks a restless mind, eager to engage new topics and debates,” Pappas adds. “His interpersonal skills, probing intellect, and ability to organize and present material in a highly effective manner are perhaps best demonstrated by his student teaching evaluations, which are among the very highest at Carey Law.”

Gray, who was named Carey Law’s Professor of the Year in 2012-13, enjoys working closely with students to develop and publish their work. He particularly likes it when students get interested in a particular idea, rule, law, or concept and want to speak to him about it.

“When they come to me with some sort of spark, I try to be a catalyst to help direct their energy and interest,” Gray says. “Sometimes that leads to a class, a clinic, or an internship. Sometimes it leads to a research project culminating in an article or an essay. No matter which direction it takes, I love it when a student drops by my office because they just can’t wait to share an experience or something they’ve learned.

“I love the energy we get from students, the sense of renewal that comes with every new academic year, and the constant drive to learn. I’ve taught criminal law for 12 years, but I still learn new things every year, often because I could not quite answer a student’s question in class to my satisfaction.”

Gray also praises his Carey Law colleagues for being intellectually engaged, productive, and warm. He says the commitment to marrying theory and practice is central to the identity of the law school, among the oldest in the nation. “And that’s one of the many reasons it has been such a wonderful home for me,” he adds.

Gray recalls applying for his Carey Law faculty position in 2007, when he was living in Baltimore and practicing law for Williams & Connolly LLP in Washington, D.C.

“There was overall a real sense of energy and purpose at the Carey School of Law when I interviewed,” Gray says. “I spent the next several months desperately hoping to get an offer. I still remember vividly getting the call from former Dean Karen Rothenberg. I felt like I’d won life’s lottery. I still do every day.”