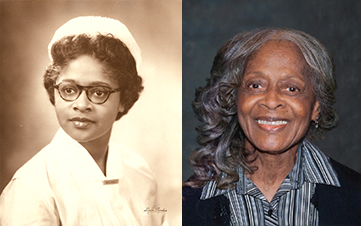 Remembering a Maryland civil rights pioneer, retired nurse, and educator, who helped pave the way for generations of aspiring students of African ancestry in Maryland and across the world.

In 1950, at only 19 years old, McCready pursued a Maryland Court of Appeals decision after UMSON originally denied her admission. Earlier, the school’s offer to pay McCready to attend a Tennessee nursing school had been upheld as legal by a Baltimore court. With the help of her attorney, Thurgood Marshall, who had already gained prominence for his work with the NAACP, McCready sued for admission to UMSON, and the Maryland Court of Appeals ruled in her favor. The case helped lay the groundwork for the 1954 landmark Brown v. Board of Education Supreme Court decision.

The ruling, however, marked only the beginning of McCready’s struggle for justice and equality. During her years at UMSON, she faced students who were hostile to her, professors who ignored her, and supervisors who attempted to sabotage her work. Yet, through it all, she maintained a quiet dignity and determination that could not be defeated. Her courage helped open the doors for generations of African American nursing students, for whom she served as a mentor and role model. Today, 49 percent of UMSON’s student body represents ethnic and racial diversity.

Upon graduation in 1953, McCready passed the state nursing boards on her first attempt and began a career that included nursing, teaching, and public speaking. She worked in hospitals in Baltimore, Boston, and New York for 35 years. She pursued her passion for music, completing undergraduate and graduate degrees at the Manhattan School of Music. She credited her older brother as a significant influence on her musical appreciation; he taught piano lessons at home, and she was permitted to sit quietly in a corner and listen. Later, her brother would ask her to evaluate the lesson and the student’s performance. This early exposure left a lasting impression on McCready and stirred in her a desire for music education. She served for 20 years as an educator in the New York City public school system, sang with the Metropolitan Opera production of Porgy and Bess, and toured with opera singer Grace Bumbry. She also taught Raven-Symone, the child actress who played Olivia on The Cosby Show.

McCready returned to Baltimore in the mid-1990s and was active at the school as well as in the Baltimore community. She served on UMSON’s Board of Visitors from 1996 to 2004 and on the Alumni Council and as a docent for its Living History Museum from 2002 to 2012. In 2004, McCready was inducted into the Maryland Women’s Hall of Fame for her unique and lasting contributions to the economic, political, cultural, and social life of the state. Always deeply interested in the challenges faced by nursing students, McCready took every opportunity to connect with and encourage students, including speaking with students as an invited guest to their classrooms, interacting with students as a volunteer docent at UMSON’s Living History Museum, and reaching out to students whenever she was on campus for alumni- or school-related events. In 2011, she was asked by UMSON Master of Science Clinical Nurse Leader option graduate Nicole Parson to serve as her pinner at the graduation ceremony.

In 2014, on the occasion of the school’s 125th anniversary, she was inducted as one of UMSON’s 25 inaugural Visionary Pioneers, selected for having made a significant impact on and contributions to the nursing profession based on their leadership, innovation, or entrepreneurship. In 2015, McCready received a Doctor of Public Service honorary degree from the University of Maryland, Baltimore — the same institution that in 1949 denied her entry to the School of Nursing because of her race.

“There is a famous poem by African American writer Langston Hughes that asks the question of what happens to a dream deferred,” said UMSON Dean Jane M. Kirschling, PhD, RN, FAAN, during the ceremony conferring the degree. “To Esther McCready, the answer is that it isn’t [deferred]. She applied to nursing school in the hopes of earning her diploma in nursing, and her application was denied. Never one to back down from a challenge, she agreed to let the NAACP argue her case in the Maryland courts. Not only were Esther’s dreams not deferred, but thanks to her courage and bravery, the dreams of so many others did not have to be, either. Esther, you are a civil rights icon, a transformational figure in education. You are a treasure.”

McCready lived at home as long as she was able, and enjoyed spending time with her family, friends, and the family of cats that kept her company and endlessly entertained her. Even in the final chapter of her life, when her voice was a whisper and movement required significant effort, she remained an independent, strong-minded woman. She spoke her mind, maintained her sense of humor, and shared her unique and profound experiences with anyone who would take the time to listen to this Visionary Pioneer for our time, for all time.

In honor of Esther McCready’s memory and legacy, alumni, faculty, staff, students, and friends may contribute to a scholarship established in her name at the School of Nursing. All gifts to the scholarship will be matched. You may contribute here.