As UMB Employee of the Month, Greenhill Can’t Avoid Spotlight 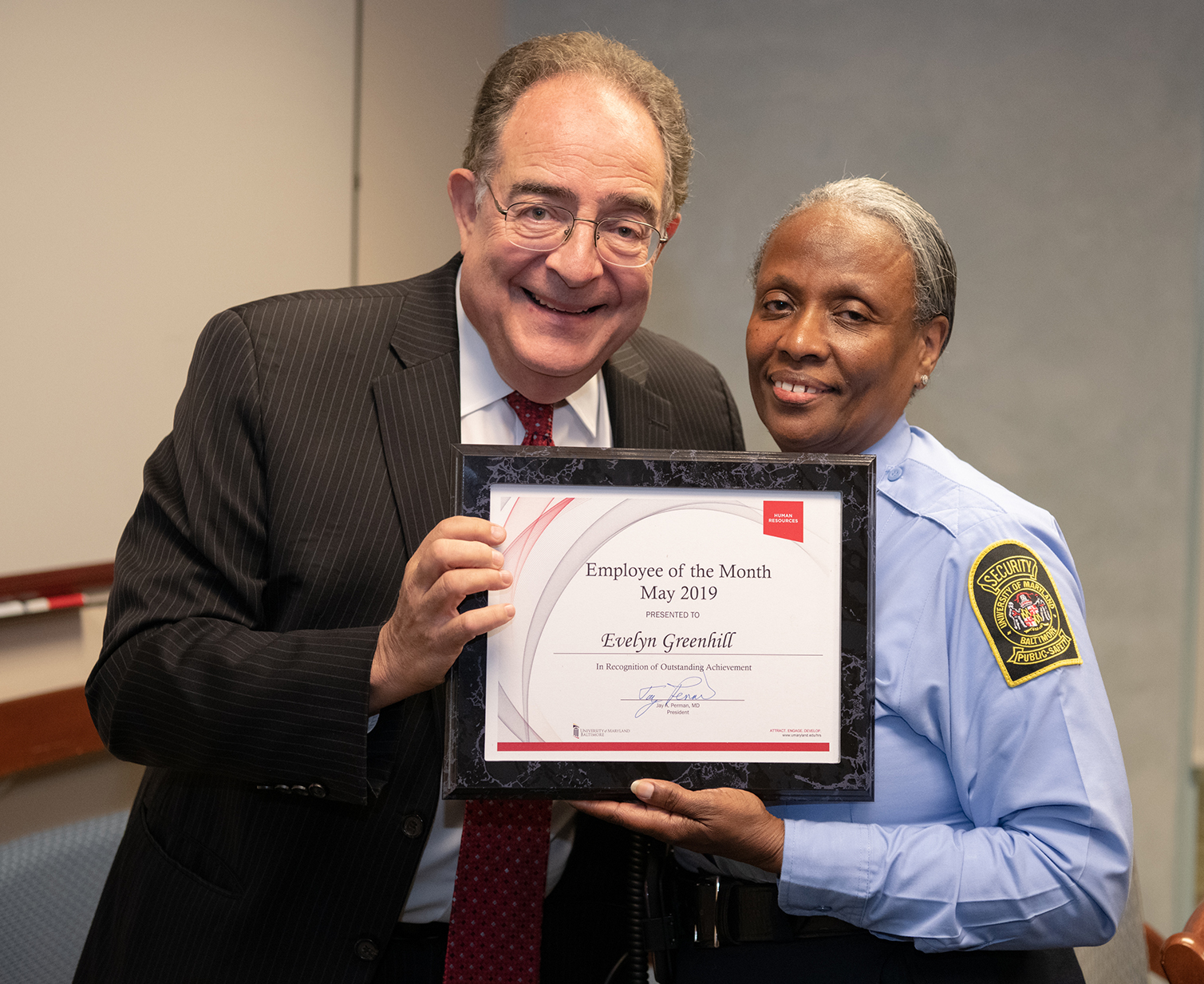 Humble and devout security officer honored for compassion, generosity, commitment to CURE Scholars, and much more.

Evelyn Greenhill was upset, a rare emotion for the personable, upbeat security officer at the Lexington Building. She had been invited to a CURE Scholars meeting in the President’s Conference Room the next day. As much as she loves working with the young people, being among University leaders was intimidating for someone who prefers to stay out of the spotlight.

So Greenhill did what she always does when confronted with a challenge: She prayed.

Given this heavenly stamp of approval, Greenhill attended the meeting on May 2. And she is glad she did. For UMB President Jay A. Perman, MD, walked in and said, “This meeting is about you, Evelyn. You are the University’s Employee of the Month!”

After a resounding cheer from the dozen colleagues assembled, Perman explained why he had been “forced” to give her such an honor. “For all these years when I’m asked to recognize somebody like yourself I get a nomination from a supervisor or a fellow employee,” Perman said. “You know what happened to me in regards to you, Evelyn? I got 20 people who nominated you. It was like a petition. Them telling me, ‘If you don’t recognize Evelyn, you’re in trouble!”

The nominations included praise such as:

Asked how she stays so upbeat, Greenhill smiles and gives a one-word answer: “God.”

The 20-year UMB employee says those entering the Lexington Building deserve nothing less than “a smile when you come in the door. Also, outside people, too, to welcome them,” she says. “Say good morning and how are you.”

Greenhill maintained this upbeat attitude even when her grandson, Corey, a 17-year-old football star at Dunbar, was killed on New Year’s Eve. How did she report to work and smile through the pain of loss?

“I had to. When you have Christ in your life, there is hope,” she says. “Out of everything that we think that is bad, God always turns it around for your own good.”

And when something bad happens around the Lexington Building, Greenhill turns it around as well, such as on Oct. 15 when there was a shooting near the Post Office next door. As Philanthropy’s John McKee said in his nomination, “Evelyn relayed information about the suspect and acted on her duties.”

“I called the communications center and then I did shelter in place to protect the people in my building,” Greenhill recalled. “I let them know that a shooting had taken place, and that I advised them to stay in the building, but I couldn’t make them stay in, but once they left, they couldn’t come back in.”

She admits she does consider Lexington “her” building, doing the little extras like finding someone on a floor to take a delivery if someone else is out. “I don’t really like taking off, because I want my people in 620 to get the best, you know what I mean? I pray for all my employees in there, for their safety going out and coming into the building. I pray for y’all every morning.”

Perhaps the building inhabitants she prays for most are the CURE Scholars, the sixth- through 10th-grade students who are preparing for future careers in science through the UMB mentoring program. Greenhill, who was named CURE Scholars Mentor of the Year on May 4, does overtime shifts on Saturdays so the scholars can attend programs in the building. They repay “Miss Evelyn”  by stopping down with lunch, snacks, juice, and conversation during their breaks.

So much so that when Kayla Wyche, a seventh-grade UMB CURE Scholar from Green Street Academy, expressed interest in going on a tour to historically black colleges throughout the South, Greenhill sponsored the $850 trip in April and also gave her spending money. Now Kayla is considering studying justice at Bethune-Cookman University one day.

Admitting that security officers aren’t the highest-paid people on campus, Greenhill, who also mentors seventh-grader Michael Davis, says it’s something she just has to do. “When I see that they need, whether it’s a hat or coat or something like this, that’s what I do. I’m blessed. I truly am. I’m not doing this on my own, I’m doing it through Christ. He’s making it possible. He blesses me, so he wants me to be a blessing to others.”

So the mother of four, grandmother of three, and great-grandmom of one serves at My Sister’s Place, and has served at Hope Lodge. She’s getting involved in the UMB Police Department’s homeless program in her “spare” time. She diverts $50 from each paycheck to CURE Scholars.

How about the extra $250 from being May Employee of the Month? Amazed that she was chosen from among 6,600 UMB employees, Greenhill says, “I’m going to have to go to God on that. I’m serious because I don’t know what he’d want me to do with it. Because without him, I wouldn't have got it.”