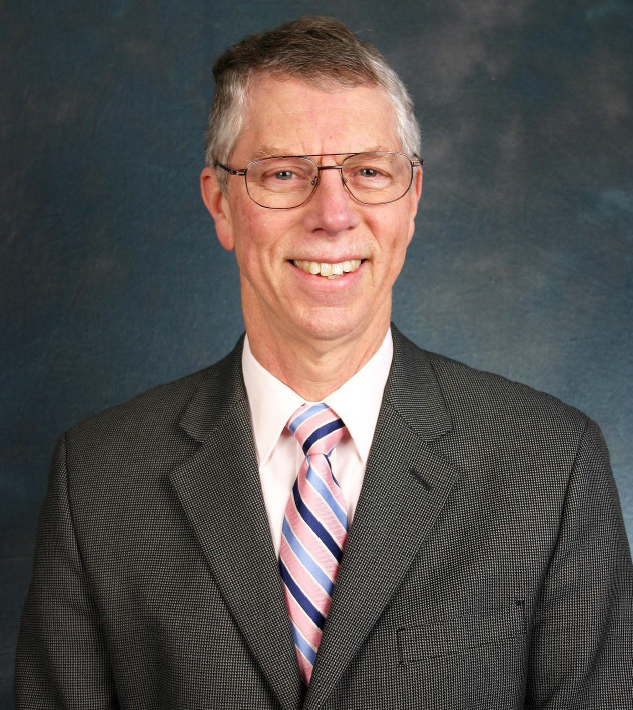 For nearly a quarter-century, Robert Beardsley, PhD, MS, has played a key but unheralded role in the University of Maryland, Baltimore’s (UMB) annual commencement, serving as Platform Party Marshal from 1995 to 2018. His job: shepherd the procession of VIPs — the president, administrative officers, deans, keynote speaker, and more — through the arena, onto the stage, and into their seats for the graduation festivities.

But this year, Beardsley will be among the VIPs, as he was selected to serve as Honorary University Marshal, with the responsibility of carrying the University mace. The new role brings him thrills … and a slight touch of trepidation.

“I was excited to be selected and then really humbled after I reflected on the previous honorees and all their accomplishments — it’s a very impressive group to join,” says Beardsley, professor and vice chair for administration in the Department of Pharmaceutical Health Services Research (PHSR) at the University of Maryland School of Pharmacy (UMSOP). “I’ve always enjoyed UMB’s commencement activities, and now I’m thrilled to assume an important role in them.

“It should be interesting to experience commencement from a new perspective,” he adds. “I hope I don’t screw it up — walk too slow, walk too fast, or drop the mace.”

If Beardsley’s long and decorated tenure at UMB is any indication, the mace is in good hands. Beardsley joined the UMSOP faculty in 1977, served as associate dean for student affairs from 1989 to 2005 and was PHSR’s vice chair for education from 2006 to 2013 before assuming his current role. In addition to his teaching, course development, and research duties, he has helped create several noteworthy educational programs, including a major initiative in 1993 to transform the BS in Pharmacy program to the entry-level PharmD program, and served as UMSOP’s lead in developing dual-degree programs with other UMB schools.

“I have seen tremendous growth in all aspects of the School of Pharmacy during my 42 years here — its research programs; its city, state, and national health outreach programs; and its professional and graduate education programs,” Beardsley says. “The school has recruited a lot of incredible faculty, staff, and students who I have enjoyed working with during my tenure.”

Clearly, the feeling is mutual, as Beardsley has chaired or been a member of countless UMB, UMSOP, and PHSR committees and was selected as outstanding teacher three times by the UMSOP graduating class. The recognition from pharmacy students is just the tip of the awards iceberg, too. Among his other accolades:

Beardsley is particularly proud of the AACP award, which recognized his impact on pharmacy education nationally. He counts as other career highlights his roles in forming Hospice Services of Howard County and the Maryland Pharmacy Coalition, a group that brings the state’s pharmacy associations together. He also takes pride in being a dedicated mentor, serving in advisory roles for PharmD, PharmD/MPH, and PharmD/MBA students as well as numerous PhD candidates throughout the years.

“Interacting with them as adult-student learners is important to me,” Beardsley says. “I try to ask, ‘How can my students apply what I am teaching to their professional and personal lives?’ I also value the time outside the classroom mentoring students. It’s time-consuming and stressful at times, but it is very rewarding to see them launch their careers and succeed in their chosen paths.”

Beardsley clearly is a busy man, but he also finds time to be a site team evaluator for the Accreditation Council for Pharmacy Education (ACPE) and has been the council’s president for two years and on its board of directors for six years. He formerly served as chair of the AACP’s Council of Deans and was on the association’s board of directors for three years.

Augmenting his commitment to students, Beardsley and his wife, Katherine Pedro Beardsley, PhD, MS, have endowed annual scholarships at UMSOP, the University of Maryland, College Park (UMCP), and Oregon State University, the couple’s undergraduate alma mater. Katherine Beardsley is a member of the board of visitors at UMCP’s College of Behavioral and Social Sciences and its former associate dean of undergraduate studies.

“Many individuals and groups supported us as well as our son Kyle, who is a professor of political science at Duke University, during our professional growth, both financially and as mentors to us along the way,” Robert Beardsley says. “We feel it’s important to do the same to support our future scholars and leaders.”

And to the scholars and leaders in the UMB Class of 2019, Beardsley passes along a piece of advice he credits to his brother Jim, who directs pharmacy residency programs at Wake Forest Baptist Health in Winston-Salem, N.C.

“Rejoice in the amount of knowledge you now have, but be aware of what you don’t know — which will become very obvious the first day you assume your next position.”