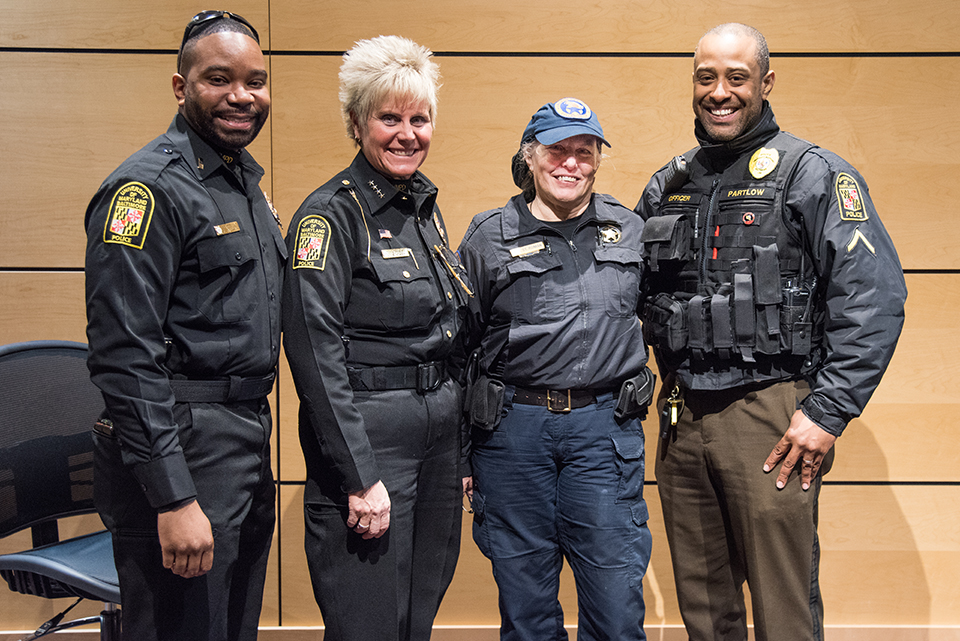 B.B. St. Roman of the New Orleans Police Department offers insights on her city's fight against homelessness at a UMB Police-sponsored symposium.

B.B. St. Roman says she carries a weapon in her role as executive director of the Homeless Assistance Unit of the New Orleans Police Department, but it's not what you might think.

"In my job, my smile is my weapon," says St. Roman, who has been leading her department's homeless outreach efforts since 2004. "In working with the homeless, the most important thing is that you go out there with a smile, showing that you're happy to see them. You need a friendly, calm, and kind approach, because that's what they're missing. They're missing that attention. They're missing that love."

Compassion was a major theme as St. Roman shared stories of her work and suggestions for how to confront homelessness during a symposium Jan. 31 at the University of Maryland School of Social Work. The 90-minute event, which drew a crowd of 60-plus, was sponsored by the University of Maryland, Baltimore (UMB) Police Force and its Community Outreach and Support Team (COAST), which was launched last fall by Chief Alice Cary, MS.

Cary attended the symposium along with COAST leader Lt. Matthew Johnson, other UMB police officers, members of the Baltimore Police Department's Homeless Outreach Team (HOT), and University students, staff, and faculty. Johnson introduced St. Roman, who spent a week in Baltimore observing the homeless outreach efforts of UMB and city agencies and offering insights from her 15 years of service in the Big Easy.

Connecting the homeless to services was stressed, as was the need for police, local government, nonprofits, and the community to work together. Indeed, after the event, attendees milled around sharing contact information and a student who chairs a homelessness council at the School of Social Work was gathering names and numbers.

"We've got to start talking to each other," says Cary, who considers the launch of the COAST unit as the proudest moment of her first six months on the job. "We need forums like this, because look at all the networking that's being done. It's the start of good things, just improving our communication with Baltimore City partners."

St. Roman began her talk stressing that it's important to find out the homeless person's backstory, recalling a man who couldn't renew his riverboat captain's license because of diabetes, a bricklayer who became blind, and a mother of five who suffered from schizophrenia.

"If you ever get a chance to sit down with a homeless person and find out what they used to do, you would be so surprised at how they had regular lives," St. Roman says. "They had jobs, families, everything was going fine, and then suddenly — bam! — they fell out of the situation and they're out in the street with nothing."

Transportation is a major issue for the homeless, so St. Roman uses a 10-passenger van in New Orleans to take people to medical appointments, shelters, and government agencies to get state IDs, which are needed to receive services. She also hands out cards with information about emergency or domestic violence shelters, detox facilities, permanent housing programs, meals, veterans' services, mental health centers, and more.

"From talking to people in Baltimore, there seems to be a bit of a gap here in the area of transportation," St. Roman says. "You might have some good services available around the city, but you need to get the homeless there, instead of having them walk everywhere, which is often discouraging for people."

St. Roman touted the success of a new "low-barrier" homeless shelter in New Orleans that features 100 beds, places no restrictions on length of stay or sobriety, and is open around the clock for both men and women. She says it follows the model of Haven for Hope, a successful program in San Antonio that features an array of homeless services located in one physical space.

"If you have mental health issues, if you have substance abuse issues, or if you need just a place to stay, it can be all in one area," says St. Roman, who also advocates for a tent-city approach, where the homeless can be concentrated under individual tents.

Cary, who worked in Oregon before coming to UMB, says tent cities are more prevalent on the West Coast. She calls herself "a strong proponent" of the concept but recognizes there are negatives and that the idea is controversial. Last year in Baltimore, an encampment that had sprouted under an I-83 overpass was dismantled by the city, which worked to move the population into shelters.

"A tent city is a common place for the homeless to go and for them to get one-stop shopping, so to speak," Cary says. "But we need to consider sanitary issues, because it can get messy, and the main obstacle we face is 'Not In My Backyard.' But between the city, the HOT team, and UMB, maybe we could get together and find a best-case scenario, because I think the concept needs to come to the East Coast."

Nate Fields, vice president of public space maintenance for the Downtown Partnership of Baltimore, praised Cary's outreach initiative and pleaded with the audience to get involved. He lamented the "Not In My Backyard" attitude and urged more cooperation to better disseminate information to the homeless and to the public at large about available services.

"We go out there fighting tooth and nail to connect people to services, but there are many barriers," Fields says. "We need a homeless outreach team in every single district of the city. We're trying to educate more and more people every single day about the different drop-in centers and locations you can go to."

Praising St. Roman, he added, "We need more people like everybody in this room to stand up and talk to your city councilman, talk to your local government, and let them know there are people trying to win the fight against homelessness. And when I get enough people who want to fight with me, versus people who want to see them removed, then we can see the city change."

UMB Pfc. Yale Partlow, who is taking up the fight as the COAST team's homeless liaison, called the symposium "highly productive."

"It's a great opportunity for a lot of representatives of different agencies to connect," he says. "Some of our officers have done ride-alongs with the Baltimore City HOT team, to get a feel for their program. We're looking to expand on what they're doing, tailoring it to the needs of our jurisdiction. I'm optimistic, because a lot of fresh ideas are being put forward."