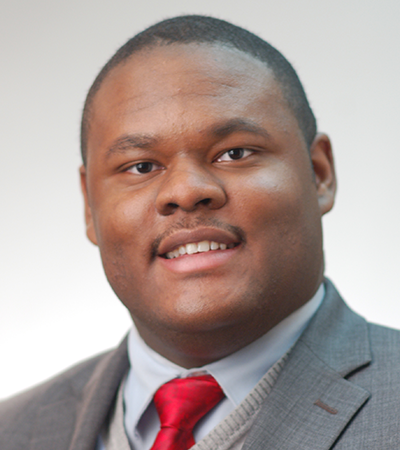 School of Medicine student gives back to his hometown of Baltimore as elementary school mentor through Talent Mentoring Program.

This is the first in a series from the University of Maryland, Baltimore's Diversity Advisory Council (DAC) highlighting a student, faculty, or staff member.

Da’Kuawn Johnson, an MD-PhD student at the University of Maryland School of Medicine (UMSOM), is a native Baltimorean and a proud product of Baltimore City public schools from kindergarten through high school.

After graduating from Baltimore Polytechnic Institute (Poly), Johnson stayed close to home and attended the University of Maryland, Baltimore County (UMBC) as a Meyerhoff Scholar and was involved in research, studying the metabolism of bacteria. Outside of research, he played in the pit band for musicals, served as a student justice for non-academic infractions, tutored science and math, and was a teaching as­sistant in biology. He reveled in what he called “the nerdy environment” of UMBC and felt that it was both collaborative and relaxed in a way that perfectly suited his needs.

Johnson was enticed away from dreams of a career as an entrepreneur to one in science and medicine at the age of 8 when an attentive third-grade teacher noticed him excelling in math. This led to extra homework that he voraciously completed and dissection of cow eyeballs the next year (as a fourth-grader!) through the Ingenuity Proj­ect.

After UMBC, Johnson again chose to stay close to home to pursue an MD-PhD at UMSOM, the institution attached to the hospital where he was born, the University of Maryland Medical Center. As a medical student, Johnson participates in the Talent Mentoring Program, where he and nearly 50 of his peers volunteer in Baltimore City elementary school classrooms with third-graders identified as advanced learners and gifted. Every week, Johnson returns to his own Calvin M. Rodwell Elementary School in Northwest Baltimore, where he was provided with additional opportunities at the same age.

In his free time, Johnson is an avid musician who can dazzle you with the piano, violin, viola, alto sax, or guitar. If you cannot persuade him to give you a personal concert, you can find him playing the organ for church and the piano during the winter holiday season at a local senior citizen assisted-living facility. Although Johnson enjoys fishing and crabbing during the warmer seasons as a way to get out­side and spend time with family, he and his family avoid the beach like the plague and sand is his mortal enemy.

To read more about the DAC, click on the link below.