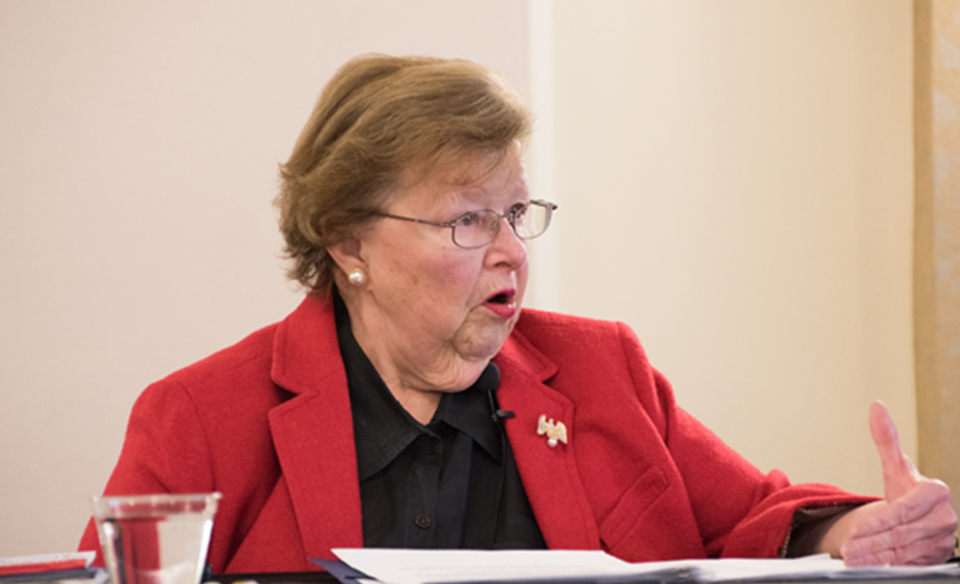 Barbara Mikulski, MSW ’65, was a social worker before launching her legendary and pioneering 45-year political career, but she doesn’t considered it a former job.

A proud graduate of the University of Maryland School of Social Work, Mikulski talked about those social work roots, community organizing, civility in Washington, presidential politics, the 2020 census, and more in her conversation with UMB President Jay A. Perman, MD. She also took questions from the crowd of 220-plus that filled the Elm Ballrooms for the seventh installment of the panel series, which was launched in January 2017 to examine issues important to the University community that are likely to be affected by the Trump administration and Congress. (Read about past panels here.)

In his introduction, Perman described Mikulski as his friend and counselor and detailed her trailblazing work as a champion for women, higher education, seniors, and the disadvantaged as the longest-serving woman ever in the U.S. Senate. He pointed out that when Mikulski was asked why she wasn’t seeking a sixth term in 2016, she said, “Well, do I spend my time raising money, or do I spend my time raising hell?”

“You know which one she chose,” Perman said.

Indeed, during the hourlong event, Mikulski showed the mix of feisty and folksy that made her a Maryland political legend and a 30-year force in the Senate, stressing that interpersonal relationships and unconventional thinking often are the keys to getting things accomplished. Now a professor of public policy at Johns Hopkins University, Mikulski began by recounting her shift from social worker to community organizer, rallying opposition to a federal highway construction project in Baltimore 50 years ago.

“I said, ‘Look, we need to fight this,’ ” Mikulski said. “So we got people in the community together at a bar, had a few shots of ouzo, and said we have to give ourselves a militant name and create the illusion of power. So we came out with SCAR, the Southeast Council Against the Road, and I began the highway fight that took me into politics.”

In her next stop, early during her tenure on the Baltimore City Council, Mikulski said she asked the body’s president to go outside the committee structure to create a rape task force, aiming to treat women who had been assaulted as trauma victims rather than merely crime victims. Counting the task force as among her proudest achievements, Mikulski said of her approach, “Always go outside the box, because otherwise you leave yourself in a box forever.”

This type of thinking was present during her time in the Senate, she said, particularly in regard to bipartisanship. Mikulski, a Democrat, recalled that in the early 1990s a newly elected Republican senator from Texas, Kay Bailey Hutchison, reached out to her for a meeting and, despite her staff’s misgivings, she obliged. This led to a friendship with Hutchison and regular meetings among female senators from both political aisles, she said.

“We didn’t agree on a lot of issues,” Mikulski said. “But we agreed on two things first: We would approach each other in a zone of civility and we would never demonize each other. We would always interact with integrity, a sense of honor, and intellectual rigor.”

“We all agreed if we were going to ‘Race for the Cure,’ we wanted to lead the marathon, so that was another proud accomplishment,” Mikulski said.

Staying on the topic of political relations, Perman asked about the state of affairs in Washington and whether the partisan divide could ever be bridged. “How do these two parties at odds on absolutely everything find some common ground?” he said.

While lamenting the vitriol and gridlock, Mikulski was optimistic that newcomers in the next Congress — “a blue wave that I’d hoped would be a tsunami,” she said — could help to turn the tide of negativity.

“There’s a tremendous new group coming in and a lot of new women got elected,” Mikulski said. “And not only does the blue wave wear lipstick and high heels, it wears camouflage. Many of the women coming in have had military service. And these veterans bring a different view. They’re a different generation. They’re not only going to come to fight for veterans’ health care, but they will oppose wars that should not be fought and make sure we win wars if we’re going to fight them.

Asked about her thoughts on the 2020 presidential race, Mikulski said she thinks the Democratic nominee will come out of the West or Midwest and that President Donald Trump will face a challenge from within the Republican Party. She said the Democrats’ race could be over quick, partly because California’s primary was moved from June to March, and she mentioned four senators — Amy Klobuchar, Kamala Harris, Cory Booker, and Sherrod Brown — as possible contenders.

“These are very talented people,” she said. “You also have Joe Biden pondering a run and Bernie Sanders pondering another run. So it’s going to be exciting.”

Bringing the discussion back to the local level, Mikulski, a lifelong resident of Baltimore, stressed the importance of the city’s participation in the 2020 census, tasking Perman and the University community with aiding Mayor Catherine Pugh to make sure every person is counted so the city can receive its fair share of federal funds.

“The consequences for Baltimore and Maryland are significant,” Mikulski said. “Eight-five percent of all federal funds that will come to Baltimore will be formula-driven, from Medicaid to mass transit, from Section 8 housing to school lunch programs. If we don’t get the census right, we will disadvantage ourselves for a decade — for a decade!

“Remember, the census is not new taxes. It’s getting our fair share back with the taxes we pay based on our population. For all of the people in this room who I know feel passionate about closing the disparity gap, the achievement gap, and the aspiration gap, all those gaps that you are so focused on, we need to have a good census.”

An undertaking like the census, Mikulski added, is where members of the UMB community can learn real-world lessons in civic engagement. And while she recognizes the power of technology and social media, she hopes that young people will realize that it takes more than emails, tweets, or hashtags to effect social change.

“This is a fantastic tool for organizing,” Mikulski said, holding up her cellphone, “but it’s also bloodless, you know? You might get the email, but you don’t get the person. So that’s why there’s nothing like interpersonal gatherings.

“I would encourage civic engagement and volunteerism, and my advice is this: Don’t treat civic engagement like it’s just an event. ‘Oh, I will go to the march. Oh, I will race for the breast cancer cure.’ That’s great. That’s wonderful. But you’ve got to do more than that.

“Engagement has to be a lifestyle, not an event.”