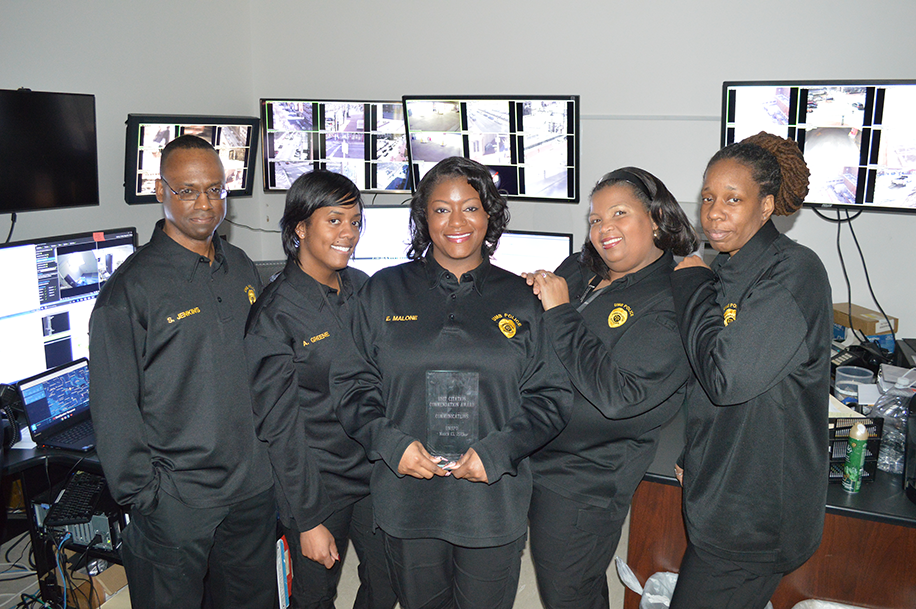 April 14-20 marks National Public Safety Telecommunicators Week. Started in 1981 by Patricia Anderson of the Contra Costa County Sheriff’s Office in California, the week is designed to celebrate those who work behind the scenes on phones and radios to ensure the smooth running of police operations. The unsung heroes of any police department, police communications operators (PCOs) operate in the shadows (quite literally).

“I need all units to 10-6 for a 10-36 of a bank robbery suspect. We are looking for a B/M wearing a black T-shirt, blue jeans, and flip-flops walking down the street headed toward the Subway.”

The beginning coded phrase is the doorway to the information gateway to every responding officer, and now the gateway has been opened.

Just a typical day in the life of a PCO at the University of Maryland, Baltimore (UMB). PCOs are the omnipresent “eagle eyes” of the UMB campus, constantly surveilling and ensuring the safety of all campus members. Walking into the UMB Police Department (UMBPD) Communications Center, it feels almost like a scene from a police television drama. Operating in a medium-sized room, often lit only by the glow of their innumerable large screens, a team of one to four officers at any given time monitors 296 cameras and 810 card readers.

PCOs are in constant contact with patrol officers, notifying them of any instances of misconduct or requesting 10-40s (police escorts). Being a PCO requires a high level of shrewdness and mental dexterity, as they have to constantly juggle monitoring multiple screens and card readers while fielding calls from patrol officers and other campus members. PCO Erika Malone says it is this constantly changing atmosphere that she enjoys the most.

From the short amount of time I spent in their headquarters, I was overwhelmed by the ever-ringing phones and radios. However, none of the officers seemed fazed by the restless environment, each of them maintaining a cheerful, welcoming disposition.

A small division of seven people, the PCO unit seemed to have an almost familial ambience. Dispatch supervisor Shawnta Privette said, “Over my 21 years as police dispatcher and dispatcher supervisor I have found there is no other bond than those who work in public safety. The relationships I have developed over the span of my career could never be replaced.”

For their stellar work, the PCO unit received a unit citation from Chief Alice Cary, MS, in March at the UMBPD police award ceremony. An unprecedented feat, it was much deserved and long overdue. We applaud the PCOs for their tireless conviction and dedication to their sworn oath to protect and serve. Thank you to the UMBPD Communications Center!