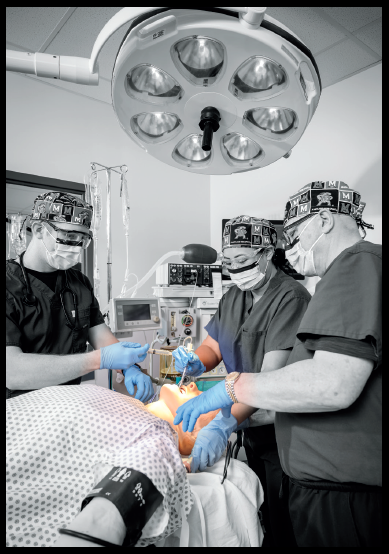 A nurse anesthetist is often the last person patients see before losing consciousness during surgery and the first to greet them when they awake.

Along the way, a patient's life is quite literally in the nurse anesthetist's hands as he or she performs a modern health care miracle: making pain-free procedures a reality.

Today, we expect to feel no pain during surgery and have no memory of the procedure, but this wasn’t always the case. Before general anesthesia was introduced, all medical procedures were performed on people who were fully conscious. The best methods for patients to lessen pain were to ingest herbal or narcotic treatments or to clench their teeth on hard objects; often, patients were held down on the operating table, and surgeons would put cotton in their own ears to muffle the sound of patients’ cries. The risk of complications dissuaded patients and surgeons from most forms of elective procedures, and people sometimes chose death over emergency surgery.

After a dentist named William T.G. Morton publicly demonstrated the use of inhaled ether as a surgical anesthetic in 1846, surgical care as we know it was forever changed. By the time the U.S. Civil War began 15 years later, anesthesia was used in approximately 95% of field surgeries – and it was being administered by nurses.

The Certified Registered Nurse Anesthetist (CRNA) credential, however, did not come into existence until a full century later. Today, these advanced practice nurses can be found in hospital surgical suites and outpatient care centers, in dentist offices and delivery rooms, in combat zones and cosmetic surgery centers, and in any other setting in which anesthesia is delivered.

According to the American Association of Nurse Anesthetists (AANA), today nearly 54,000 CRNAs administer more than 45 million anesthetics to patients annually. They are the sole providers of anesthesia in approximately two-thirds of all rural and medically underserved regions of the United States and the main providers of anesthesia to the U.S. Armed Forces.

U.S. News & World Report has ranked nurse anesthetist among the top 10 “best jobs” for three years running — and it also ranked UMSON’s Doctor of Nursing Practice Nurse Anesthesia specialty No. 10 nationally in 2017, the last time such programs were ranked. Joseph Pellegrini, PhD, CRNA, FAAN, professor and director of UMSON’s Nurse Anesthesia specialty, says that the reason the profession is so highly ranked is “partly the pay, but mostly the job satisfaction.”

The proof is in the numbers: The Bureau of Labor Statistics (BLS) reports that nurse anesthesia is the highest-paying nursing specialty, and according to a 2017 Medscape Nurse Career Satisfaction Report, 97% of CRNAs report that they are pleased with their chosen profession.

All of these factors contribute to a workforce that’s expected to grow; the BLS projects a 16% increase in CRNA positions from 2016 to 2026, more than double the average for all occupations. There has also been a surge in applications at UMSON: More than 300 were submitted for 24 spots in the most recent class. 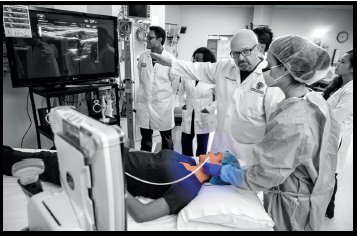 But 15 years ago, the program was merely an idea brought to then-Dean Janet D. Allan, PhD, RN, FAAN, now UMSON dean emerita, by area CRNA leaders – among them John Bing, CRNA, then-president of the Maryland Association of Nurse Anesthetists (MANA), and Jane McCarthy, PhD, CRNA, FAAN, former AANA board member and former president of the District of Columbia Association of Nurse Anesthetists.

“When they came to meet with the dean, they had done all their homework and had all of the data, and they made extremely compelling arguments,” explains Patricia Gonce Morton, PhD ’89, MS ’79, RN, FAAN, who was UMSON’s assistant dean for master’s studies at the time. She is now dean emerita at the University of Utah College of Nursing.

That data showed demand for CRNAs far exceeded the supply. And the numbers were only expected to increase because, as Morton explains, as people live longer, they tend to have more surgical procedures and routine tests that require sedation. In Maryland in 2004, hundreds of CRNAs were practicing, but data from the Maryland Hospital Association showed they had a high job vacancy rate – and no school in the state offered nurse anesthesia education.

Allan was convinced. She asked Morton to lead the charge in developing the new program, and McCarthy was released from her job with the U.S. Public Health Service Commissioned Corps to help design the curriculum. “Jane had the knowledge of nurse anesthesia. I had the knowledge of academia and the university. And John joined our team because he had relationships with all the clinical sites,” Morton recalls.

“THE STATE WAS RECEPTIVE BECAUSE OF THE NEED FOR NURSE ANESTHETISTS, AND BECAUSE PEOPLE KNEW THAT IF SOMEONE GRADUATED FROM UMSON THEY WOULD BE WELL PREPARED AND WELL QUALIFIED.”
- PATRICIA GONCE MORTON

Morton fondly remembers the trio carpooling to meet with clinical teams at hospitals and other stakeholders across the state. In the end, they were able to garner the support they needed, including more than $1 million in funding from the University of Maryland Medical Center (UMMC) and The Johns Hopkins Hospital.

“The state was receptive because of the need for nurse anesthetists, and because people knew that if someone graduated from UMSON they would be well prepared and well qualified,” Morton says. “And we had to go through the very rigorous accreditation standards in the world of nurse anesthesia education.”

The program has continued to meet those rigorous standards. In November 2017, the Council on Accreditation of Nurse Anesthesia Educational Programs found it to be 100% in compliance with its standards and granted the program continued accreditation for a decade with no annual progress report required,
a rare accomplishment. 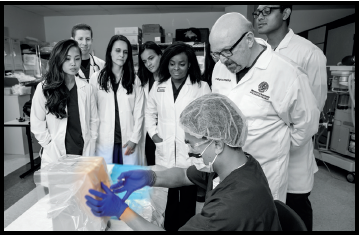 While UMSON’s Nurse Anesthesia program is lauded nationally, the draw for students goes beyond rankings: Other contributing factors include a simulation lab with a fully functional operating room introduced in 2018, individual mentorship pairing with upperclassmen, and strong partnerships with clinical sites, including UMMC’s R Adams Cowley Shock Trauma Center, where nearly all of UMSON’s Nurse Anesthesia specialty students rotate. From the program’s start, another hallmark has been its diverse student body.

“Part of the charge from the beginning was that we needed to diversify anesthesia departments,” explains Bing, who was awarded the Dean’s Medal for Distinguished Service at UMSON’s most recent Commencement ceremony in May (see Page 10). In addition to being instrumental in establishing UMSON’s program, Bing has represented the nurse anesthesia profession at state, national, and international levels, with a special focus on nurses of color.

According to AANA, about 11% of CRNAs nationally identify as minorities. At UMSON, however, 50-60% of each Nurse Anesthesia specialty cohort is composed of students from diverse backgrounds.

“PART OF THE CHARGE FROM THE BEGINNING WAS THAT WE NEEDED TO DIVERSIFY ANESTHESIA DEPARTMENTS.”
- JOHN BING

Bing echoed that sentiment. “When you come to the door and you see somebody who looks like you or speaks your language, that decreases anxiety for both people – the patient and the nurse. And besides that, we need to learn how to understand everybody’s culture,” he says.

Bing is president of the Diversity in Nurse Anesthesia Mentorship Program, a nonprofit organization that aims to inform, empower, and mentor underserved diverse populations and prepare them for successful careers as CRNAs. This includes hosting seminars around the country to introduce nurses to the profession and to potential nurse anesthesia programs.

Student DeVontee D. Rayford, BSN, RN, CCRN, attended one of those seminars, which happened to be hosted at UMSON in 2016.

“As soon as I visited, I knew I would apply to UMSON later,” she says, citing that part of the attraction was the diversity represented in the program. “I feel like it’s important for people to mingle with other cultures and be exposed to different things. If you learn among the diversity, you’ll be a more well-rounded anesthesia provider.”

Rayford had been working as a labor and delivery nurse in a small Texas hospital when a nurse anesthetist performing an epidural introduced her to the CRNA role. “Being a nurse on the floor, I love taking care of people, but I never felt like I really had a lot of impact on their health care. To be in a more autonomous role – to be more accountable for someone’s health care – that’s what really attracted me to becoming a nurse anesthetist,” she says.

After she graduates, Rayford plans to stay in Maryland, which is typical of about 75% of UMSON’s nurse anesthesia students, even though half of the program’s students come from out of state.

Gayden also talks about the multiple factors that contribute to the still-looming CRNA shortage in Maryland: As the state loses aging health care providers who are retiring, he says, Maryland needs more faculty qualified to educate students and new hospital policies such as those that allow funding for residencies and training.

“I FEEL LIKE THIS PROGRAM IS SETTING ME UP TO BE AN INDEPENDENT PROVIDER THE DAY AFTER GRADUATION.”
- DEVONTEE D. RAYFORD

For UMSON graduates, being in demand is the silver lining to the shortage. Pellegrini notes that students tend to receive two to three job offers upon graduation and that all Class of 2017 students passed the AANA national certification examination and were employed within three months of graduation. To date, more than 300 CRNAs have graduated from the program and entered the workforce.

Rayford says that the faculty make it clear that they want everyone to be successful. “I feel like this program is setting me up to be an independent provider the day after graduation,” she says. “This program really prepares you to practice autonomously.”

What does a CRNA do?

CRNAs care for patients before, during, and after medical procedures. While actual job duties vary by setting, daily responsibilities may include: