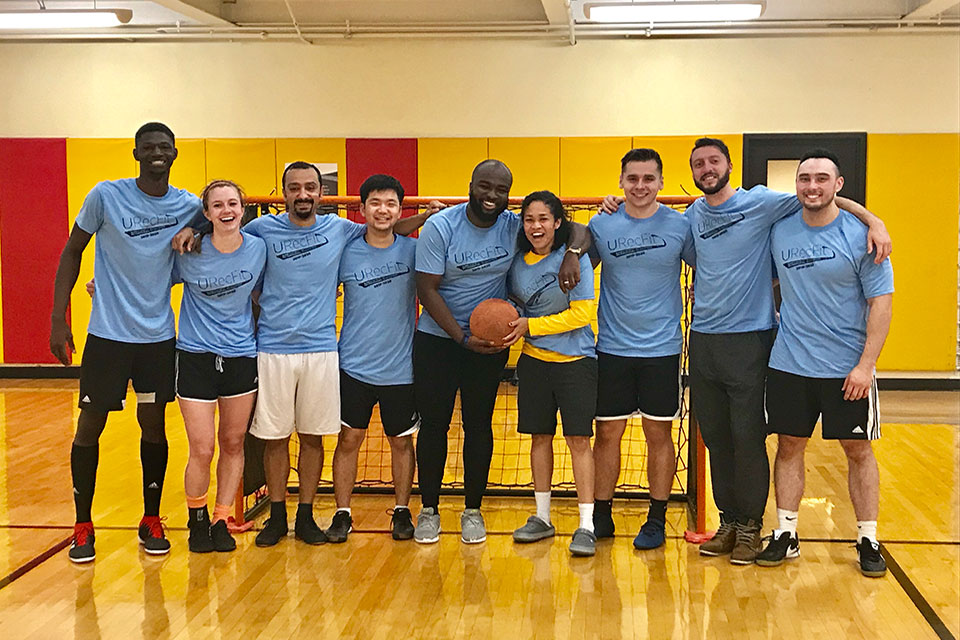 In 2017, as a first-year student pharmacist attempting to adjust to a new city and a new, demanding academic program, I sought ways to meet people as well as relieve stress. I approached a few other first-year students who shared my passion for soccer, and together, we formed an indoor team that gave us a fun, competitive outlet to relax after class and bond over our shared passion for the sport.

Now, two years after the first team was formed, we are celebrating our second season bringing home the gold in the University of Maryland, Baltimore’s (UMB) Indoor Intramural Soccer Championship.

Exercise for Our Bodies and Minds

Our 2017 team included eight first-year student pharmacists and was named Pharm United to combine our love for the pharmacy profession and the world-renowned England Soccer Club, Manchester United. Our team uniform consisted of the red Pharmapreneurship T-shirts given to all first-year student pharmacists during the School of Pharmacy’s White Coat Ceremony (red also is the official color of the Manchester United Football Club, so our uniform choice worked out very well).

Our team also was co-ed. Most of us had played soccer as students in the past and were used to balancing academics with extracurricular activities. We viewed playing soccer as an indispensable part of our success as students, because we believe it is one of the best ways to deal with the stress of being in a challenging academic program. For us, it became a healthy way to socialize, get active, relieve stress, and simply enjoy playing a game we all loved. It truly gave us a chance to get the mental rest needed for us to be at our best when we returned to the classroom.

The Road to Becoming Champions

Our first team competed in the 2017 UMB Indoor Intramural Soccer Championship but did not make it to the final. However, we continued to recruit new students and participated in other intramural leagues as well as city-wide leagues in Baltimore.

In fall 2018 we expanded the team to include new second-, third-, and fourth-year students, as well as a faculty member, Daniel Deredge, PhD, research assistant professor in the Department of Pharmaceutical Sciences (PSC). That year, we went on to compete in the UMB Indoor Intramural Soccer League and ended the season as champions with six wins, zero losses, and one tie.

When it came time to defend our 2018 title, I found myself to be the only remaining player from our original team, and thought that — since almost all of our players were new to the team — a name change might be appropriate. Our new team became known as Rx Madrid, a play on the name of the world-renowned Spanish soccer club, Real Madrid. Rx Madrid included first-, second-, third-, and fourth-year students as well as our returning faculty member, Dr. Deredge. A few students from the School of Medicine also joined our team. Rx Madrid went undefeated this season with a record seven wins, zero losses, and one tie to become the 2019 UMB indoor intramural soccer champion.

It feels amazing to be back-to-back champions as well as to see the progression of the team over the past two years. I still remember how much fun we had that first year, even though we may not have performed our best. But I have to admit that it is nice to know that, now, everyone on campus who knows about the soccer league will tell their friends that the School of Pharmacy’s soccer team is the best.