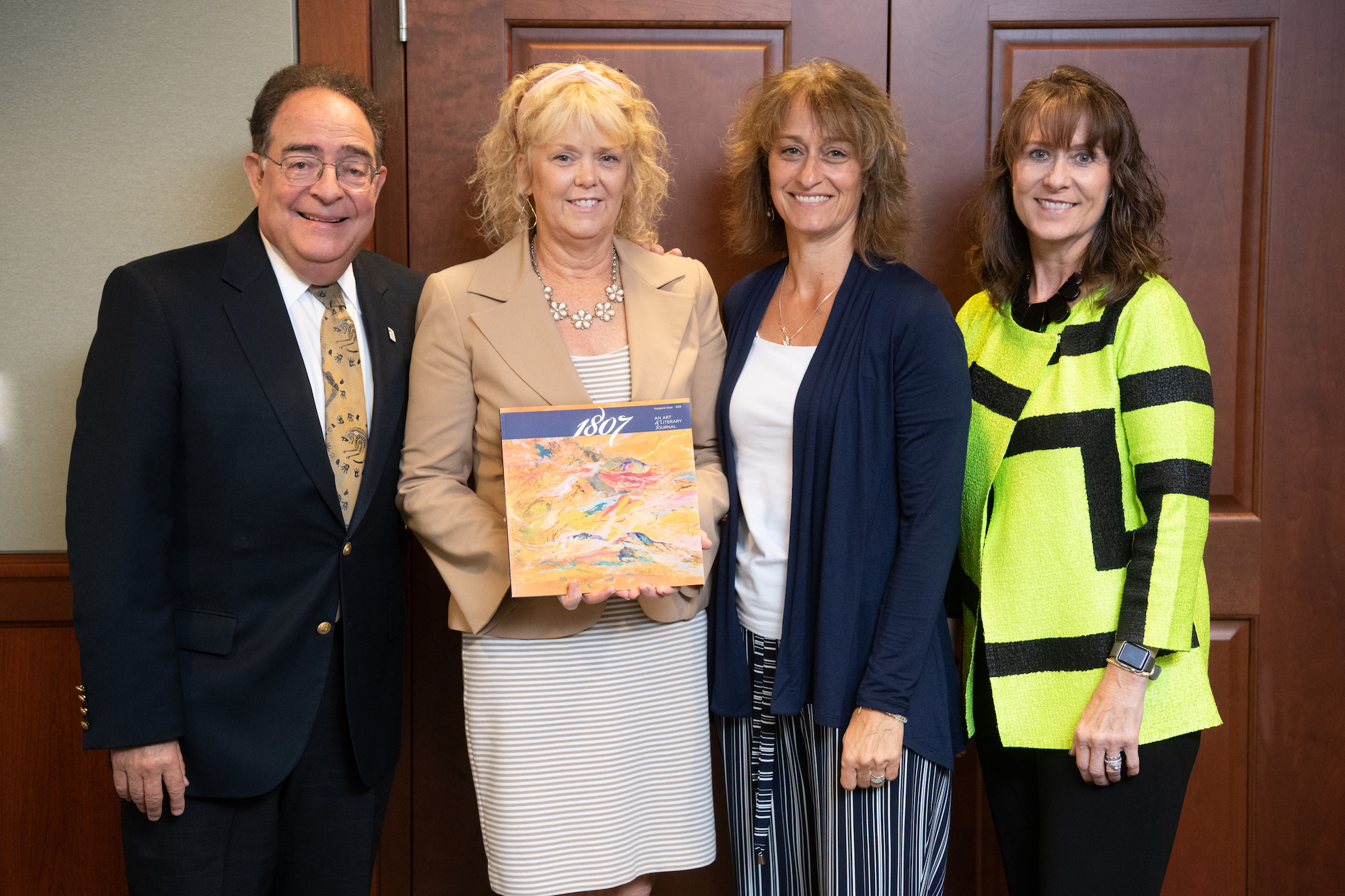 Senior marketing specialist in Communications and Public Affairs named Employee of Month for work on ‘1807’ journal.

Dana Rampolla rocked Jennifer Litchman’s “baby,” and for doing so she has been named September Employee of the Month at the University of Maryland, Baltimore (UMB).

University President Jay A. Perman, MD, broke up a scheduled Communications and Public Affairs (CPA) staff meeting on Sept. 11 to present the award. Grasping a copy of 1807, UMB’s inaugural art and literary journal, Perman said to Rampolla, “I’m sure there are a lot of reasons to recognize you. But we have one particular reason today, and it’s what I’m holding.”

“Jennifer’s baby,” replied a smiling Rampolla, who was sitting near Litchman, UMB’s senior vice president for external relations, special assistant to the president, and chair of the Council for the Arts & Culture, with a dozen-plus CPA colleagues, Human Resources staff, and President’s Office staff in the Saratoga boardroom.

Perman laughed and continued, “It might be Jennifer’s baby, but I’ll tell you something: CEOs like me are always looking for the proverbial home run. Something that makes us look good. And this [holding up the journal] has made us look good. And yes, it was Jennifer’s idea. But this could have never happened without you managing it and moving it along in so many ways. So thank you, Dana, for letting us hit a home run!"

Afterward, a stunned Rampolla reflected on the award. “I was 100 percent surprised,” she said. “Totally shocked. When we got called over here, I thought it was to hear about some new project.”

As senior marketing specialist in CPA, Rampolla has helped promote hundreds of projects in her three years at UMB. Things like CURE Scholars and community engagement for the President’s Office, parking and police for administrative units, materials for UMB’s individual schools, then Universitywide events like TEDx, MPower, and now the Donaldson Brown Center campaign. One day she might be dressed up for the Founders Week Gala; the next she’s on her knees spray-chalking dog prints on sidewalks around campus for Fall Fest.

But 1807 was different. From the spring of 2018 until it went to print in the spring of 2019, Rampolla drove the process. Litchman, MA, and Laura Kozak, MA, associate vice president of CPA, said as much in their Employee of the Month nomination:

“As creative director and managing editor, Dana was the driving force, whether it was announcing that submissions were being accepted from faculty, staff, and students, working with the 25-member review team to go through the hundreds of submissions that resulted, contacting both those whose entries were accepted and those whose entries were rejected by individual letter [in one case an early acceptee was later rejected and got a customized letter, too]. Then Dana led the painstaking process with the designer to get the glorious works on the printed page in an organized fashion, balancing a tight deadline, the desires of the 1807 Editorial Board, soliciting support from her Communications and Public Affairs colleagues, and more.”

Rampolla admits it was quite an undertaking. The 60-plus-page glossy journal of 68 artists (writing, visual arts, photography, and varied media) didn’t just happen. There were over 250 submissions. “I had a feeling it was going to be all-encompassing, but I didn’t realize the magnitude,” said Rampolla, who interviewed outside designers and printers and negotiated contract terms and conditions. “It was quite a learning curve.”

Her mother’s deteriorating health near the close of the massive project only added to the challenge for Rampolla, who took work home nights and weekends and worked remotely some days to spend more time with her mother.

Finally on May 10, there was a launch party for 1807. Perman and Maryland First Lady Yumi Hogan, honorary chair of UMB’s Council for the Arts & Culture and an artist herself, spoke and contributors held copies of the journal, fresh off the press two days before. “It was exciting to see our labor of love turn into a hard copy that we could touch and smell — people kept remarking on the smell of it, which I found interesting,” Rampolla said. “And to see all the entries in print and literally touch the culmination of so many months of dedicated work on a specific project was rewarding and gratifying.”

Rampolla said all the effort was worth it — and not just because she was holding her Employee of the Month plaque and knowing that an extra $250 would be in her next check.

“My grandmother used to always say, ‘Give a busy person a project and they’ll get it done.’ With my 30 years in photography, I love anything to do with the creative arts,” Rampolla said. “So I’m appreciative that Laura and Jennifer trusted me with this.

“When I conceived of the idea for the exhibit, I had no idea I would be so moved when I saw the artists’ work hanging in the Weise Gallery. To see everything transform from a one-dimensional image on paper to the actual physical artwork in its true size and form, color and shape — that’s when I really took a step back and said, ‘Wow, we really do have talented artists here.’ And it filtered through the entire campus community. Art really has no boundaries. We have pieces from the lowest-salaried employees to Dr. [Bruce] Jarrell, the No. 2 man at UMB. I’m very grateful to have played a small part.”

Submissions will be accepted this fall for the next edition of 1807, which will be published next spring.