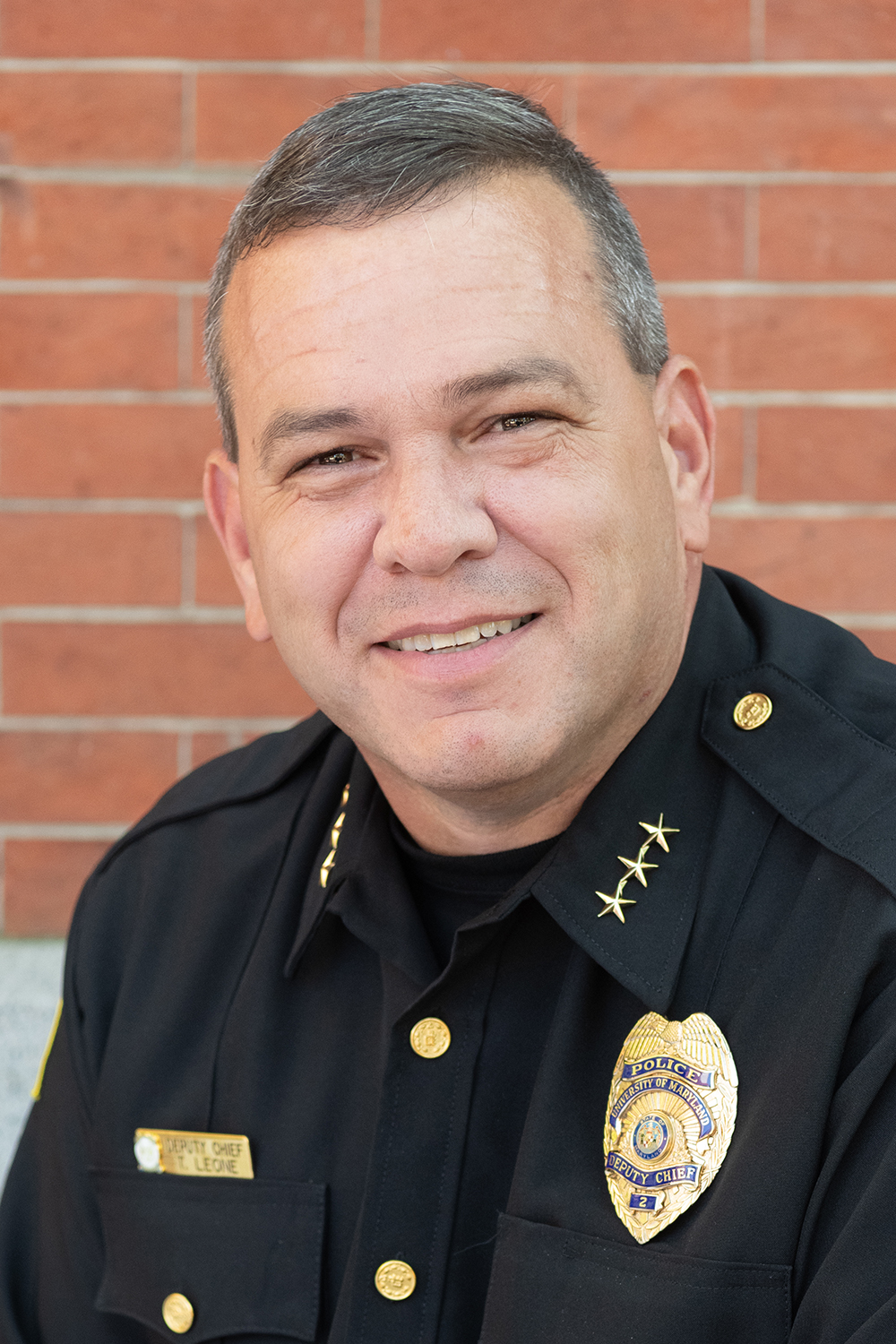 UMBPD continues to be the model in progressive, community-oriented policing.

Interim Chief Thomas Leone laughs from behind his desk, strewn with loose papers, family photos, and a pair of purple nitrile gloves. His eyes crinkle as he leans back in his chair for a few precious moments sandwiched between meetings, phone calls, emails, and countless text messages.

In his 4½ years with the University of Maryland, Baltimore Police Department (UMBPD), Leone has been known for his upbeat, go-with-the-flow attitude. “You can’t stop the waves, but you can learn how to surf,” he’s been known to say. As Chief Alice K. Cary, MS, transitions to her new role as executive director of public safety and chief of police at the University of Illinois at Urbana-Champaign, Leone is excited to step up to the plate.

Those values are ingrained in Leone, who spent 20 years with the Frederick County (Md.) Sheriff’s Office. “There was an expectation that we uphold the core values in the Sheriff’s Office,” Leone says. “We policed each other. If you saw someone step out of line, as a co-worker, the expectation was that you wouldn’t let it go without saying something.”

From a young age, Leone considered himself a caretaker, someone who looked after others who couldn’t look after themselves. He grew up in a small western Pennsylvania town, 40 minutes outside of Pittsburgh. His mother died when he was 12 years old, and he was left to help raise his younger brother, who is deaf, while his father worked long hours for the county government.

In 1993, Leone and his wife, Kelli, decided to leave Pennsylvania, where job opportunities were scarce. In October 1995, he was hired by Jim Hagy at the Frederick County Sheriff’s Office. With no education and little more than the clothes on his back, Leone says Hagy took a chance on him.

“Hagy’s vision 25 years ago is what we’re talking about making police reform into today,” Leone says. “Community relationships. Fair and impartial treatment of everyone. Honesty, integrity, respect. If you do those things, you don’t have anything to worry about. Hagy always said, ‘You always have to look yourself in the mirror, so do the right thing when nobody’s looking and you never have to doubt who you’re looking at.’ That’s stuck with me, and that’s how I’ve carried myself all these years.”

As tensions rise across the country between citizens and law enforcement agencies, Leone feels confident in UMBPD’s ability to be a model for police reform in municipalities nationwide. The department’s Community Outreach and Support Team (COAST) engages with neighbors in West Baltimore and provides resources to the community. UMBPD’s homeless outreach liaison works with the Baltimore Police Department in one of the nation’s first Law Enforcement Assisted Diversion (LEAD) programs, which diverts individuals with unmet behavioral health needs — such as addiction, mental illness, homelessness, and poverty — and provides resources for community-based harm-reduction intervention rather than arrest.

“LEAD really gives folks a hand up when they need it,” Leone says. “When your life is unstable and things are in chaos, small wins make a world of difference and give you a foundation to grow on.”

UMBPD hasn’t always been the progressive, community-oriented police department it is today. When Leone joined the department in 2016, he could see issues right away.

“At the time, our officers were not ambassadors for the University. They were just sentries standing at the gate, so to speak,” Leone says. When Cary joined the department in 2018, she developed the department’s robust community relationships and fostered a more progressive, 21st-century policing philosophy.

Now, UMBPD is on its fourth chief in four years. Leone hopes to provide some much-needed stability within the department.

“The reforms people are looking for are what we already do. We’re what people want to emulate,” Leone says. “We can’t change the wrongs of hundreds of years of policing, but we can do it right moving forward, and we’re on that path.”

Leone also has taken on a journey of personal growth over the past 25 years. After joining the Frederick County Sheriff’s Office, he started earning his associate’s degree on nights and weekends.

“I was a cop with three small kids working rotating shifts,” he says. “That associate’s degree took forever!”

After that, Leone says, the bachelor’s degree came a little easier. He’s now earning a Master of Science in Homeland Security and Crisis Management Law from the University of Maryland Francis King Carey School of Law. “It’s important to keep learning, to keep growing, getting better,” he says.

Leone’s nearly 26 years in law enforcement have showcased a consistent commitment to professionalism, integrity, and civility. As he reflects on his career, Leone recalled a defining moment when his team at the Frederick County Sheriff’s Office served a warrant on a home as part of a drug investigation. Inside the home, Leone found a padlocked closet. Inside the closet were two children, about 7 and 4 years old.

“It was despicable,” says Leone. He sent an officer to get McDonald's for the children, who were hungry. “It was the best $10 I ever spent.” He sat on the porch and talked with the children until their grandmother came for them.

Several years later, Leone was volunteering in his community coaching football. “This kid comes up to me and says, ‘Hey, you saved my life.’ I didn’t recognize him at first — he looked completely different — but when he started telling the story, I said, ‘Oh yeah, I remember you.’ That’s why we do this — to save that one person.”

When you see Leone around campus, be sure to say hello; the new interim chief loves to chat and he wants to hear from the community.

“I want to be known as the person who did it the right way,” he says. “We don’t always have to agree, but we can listen and have a discussion about why we do what we do.”