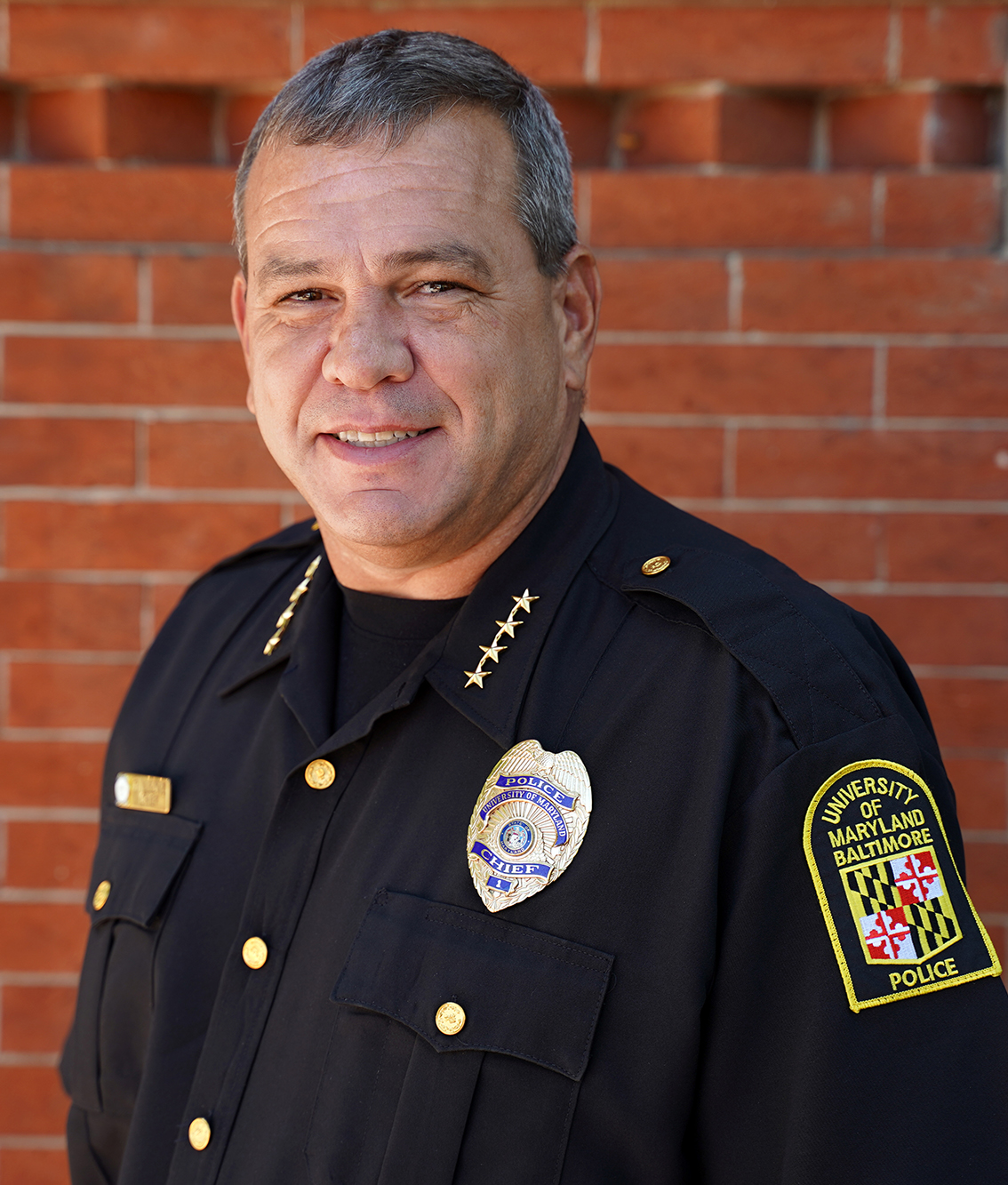 Thomas Leone, MS, greets a University of Maryland, Baltimore (UMB) employee from behind the plexiglass at the Southern Management Corporation (SMC) Campus Center. His eyes crinkle as he laughs underneath his mask. You may not expect to see UMB’s new chief of police checking IDs, but that’s exactly what Leone is doing.

“It’s important to me that I make time to connect with our community,” Leone says. “And if I can give a hard-working security officer a break, I’m going to do it.”

Leone was named chief of the UMB Police Department (UMBPD) on Sept. 22 after a nationwide search. He joined UMBPD in 2016 after a 20-year tenure with the Frederick County (Md.) Sheriff’s Office and had served as interim chief of police since June 2020. In May 2021, Leone graduated with a Master of Science degree in Homeland Security and Crisis Management Law from the University of Maryland Francis King Carey School of Law.

Leone may have a new title, but he’s not new to UMB. His friendly personality and unique turns-of-phrase make him an approachable leader. Leone is often one of the first faces new students see at orientation.

“UMBPD is a different kind of police department,”  Leone says. “Policing doesn’t have to be ‘how it’s always been done.’ We’re leading the way in community engagement. We’re going to work every day to learn and improve.”

UMBPD’s Community Outreach and Support Team (COAST) is a cornerstone for the department. Founded in 2018 by former Chief Alice Cary and now under the supervision of Lt. Matthew Johnson, COAST focuses on programs such as the Police Athletic/Activities League, comfort K-9, and crisis and intervention outreach. As interim chief, Leone developed a partnership between UMBPD and the University of Maryland School of Social Work (UMSSW); interns and clinical certified social workers will bring needed resources to vulnerable populations beginning this fall. COAST was awarded the 2020 Maryland Chiefs of Police Association’s Exceptional Police Performance by a Unit/Team/Collaboration Award and the prestigious 2021 International Association of Chiefs of Police/Walmart Leadership in Community Policing Award.

Over the past year, Leone has developed workgroups focusing on diversity, equity, and inclusion with members of the UMB community. The conversations he’s having are directly impacting and changing the department.

“It’s one thing to have these important discussions, but we can’t stop there. This workgroup means nothing if we don’t walk the walk,” Leone says. “There’s no magic cure to fix hundreds of years of systemic injustices. All we can do is work together to do better moving forward.”

Partnerships with UMB students, faculty, and staff also have been critical to the department’s success. Police officers and police communication operators are receiving mental health first aid training through the University of Maryland School of Nursing. Police officers also are receiving Trauma-Informed Policing training with Kyla Liggett-Creel, PhD, LCSW-C, clinical assistant professor, UMSSW. Security supervisors are attending workplace mediation training with the Center for Dispute Resolution at the Carey School of Law. Experts from the UMB schools of medicine, pharmacy, and nursing, and the University of Maryland, College Park Department of Computer Science will partner with UMBPD for the Resilience Project, which provides officers with training and strategies to combat stress and trauma.

Under Leone’s leadership, UMBPD has achieved dual accreditation for professional excellence in public safety from the Commission on Accreditation for Law Enforcement Agencies, Inc., and the International Association of Campus Law Enforcement Administrators. Improved operations deployments led to a 54.7 percent reduction in crime in 2020. Deployed body-worn cameras have led to an increase in departmental transparency. Leone also created mentorship and advancement opportunities for security officers to attend the police academy; those recruits graduated this month and are joining the UMBPD as police officers.

“Being your new chief is an incredible honor,” Leone says. “We’ve already accomplished so much. I can’t wait to see what the future holds.”