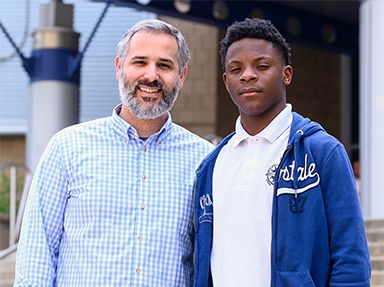 In February 2018, I began a second career as a nurse at the University of Maryland Medical Center. That same month, I met a high school freshman named Jarmaine when I became a volunteer with a Baltimore organization called Thread. Since then, I’ve developed skills as a new graduate nurse all the while my relationship with Jarmaine has changed my perspective of our city and the underserved and the isolated populations that live here. At the start of both endeavors, I was naive to how well each pursuit would complement the other.

As a health care provider, I’m aware that education and health are related. There are many social determinants of health, and receiving a high school diploma is one of them. As education increases, there is a correlation to decreased risks of many morbidities, including heart disease, diabetes, and obesity. With that understanding, it is heartwrenching to know that more than 20 percent of Baltimore youth don’t graduate high school. Historically, only 6 percent of youth with a grade-point average below 1.0 graduate. In Thread, 85 percent of these low-performing students are graduating from high school within six years.

Thread identifies ninth-grade students who are academically performing in the bottom 25 percent of their class and surrounds each of them with a “Thread Family” of up to four adult volunteers. They do the things that many of us take for granted and that many of our own families did for us, ranging from rides to school and tutoring to legal and medical aid, food and housing support, and even employment assistance. Thread students are enrolled in the program for 10 years and receive continued support as young adults.

Having lived in Baltimore for a few years, I thought I had an understanding of the challenges facing our underserved populations, but as a Thread volunteer, I’ve gained insight and context to what that actually looks like. Many Baltimore communities are living through poverty and homelessness and are facing inequalities and disparities in housing, employment, education, and health.

Our Thread Family consists of me, my wife, a close friend, and Jarmaine — our student. Thread families contain people of varying ages and backgrounds with the goal of supporting the young people in the city and building bridges between Baltimore communities. Our Thread Family supports Jarmaine similarly to the way families can support a niece, grandson, or cousin. We see him several times a week, providing rides to school or a quiet space to do homework. We watch movies with him and help him prepare for job interviews and school exams. Sometimes we just hang out, eat pizza, and play Uno.

As I get to know Jarmaine and his family and community, I continue to be the one learning. I’ve learned the valuable lesson of meeting him and others where they are and of continuing to look beneath the surface for the roots of problems. Early on, we couldn’t understand why his school attendance was so poor until we started to understand the difficulty in navigating the city bus system to get to class.

I’m not here to fix or change who Jarmaine is, but to offer him an alternative perspective and outlook of what his options are for the future. As a Thread Family, we have comforted on another, learned about each other’s daily lives and struggles, and developed lasting relationships throughout our city. We’ve challenged each other’s ideas and watched a lot of superhero movies along the way. It hasn’t always been the easiest journey, but the best journeys never are.

More information about Thread can be found at thread.org.