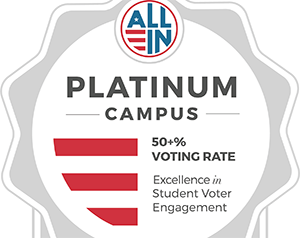 ALL IN Challenge national honor awarded for achieving student voting participation rate of more than 50 percent.

The University of Maryland, Baltimore (UMB) received a platinum seal for achieving a student voter participation rate above 50 percent at the 2019 ALL IN Challenge Awards Ceremony, which was held to recognize colleges and universities committed to increasing college student voting rates.

(A full list of awardees can be viewed here.)

“Our institution is proud to receive this national recognition,” said Patty Alvarez, PhD, assistant vice president of student affairs, Office of Academic Affairs. “Our faculty, staff, administrators, and students are committed to working together to increase engagement and graduate civic-minded students who are prepared to solve the most pressing challenges facing our city, country, and the world.”

“We are excited to honor the University of Maryland, Baltimore with an ALL IN Challenge platinum seal in recognition of their intentional efforts to increase democratic engagement and full voter participation,” said Jennifer Domagal-Goldman, PhD, MA, executive director of the ALL IN Campus Democracy Challenge. “More institutions like UMB are changing culture on campus by institutionalizing nonpartisan democratic engagement efforts that are resulting in the incredible student voter turnout rates that we’ve seen across the country.”

The ALL IN Campus Democracy Challenge is a nonpartisan national initiative recognizing and supporting campuses as they work to increase nonpartisan democratic engagement and full student voter participation. The challenge encourages higher education institutions to help students form the habits of active and informed citizenship and to make democratic participation a core value on their campus.

More than 560 institutions, enrolling more than 6.2 million students, have joined the challenge since its launch in summer 2016.