Vaccines: ‘One of the Greatest Public Health Achievements’ 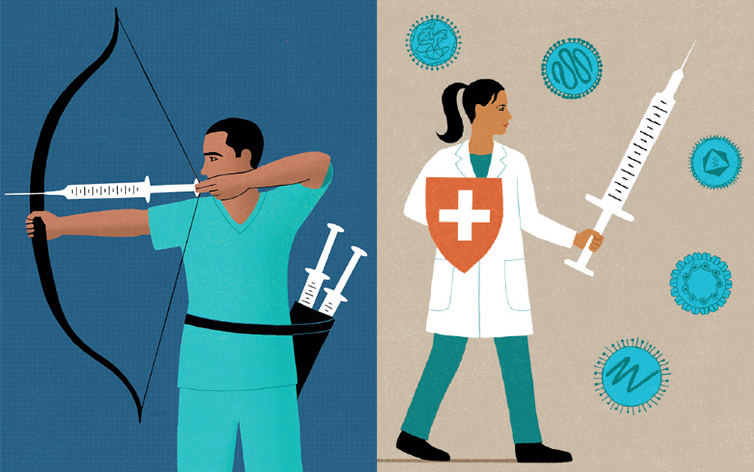 Vaccine hesitancy can be a significant challenge for nurses and for public health. Our experts weigh in on the best ways to combat it.

“There’s been a 95 percent decrease in vaccine-preventable disease in the last 50 years,” says Patricia McLaine, DrPH, RN, assistant professor and director of the University of Maryland School of Nursing’s (UMSON) Community/Public Health Nursing master’s specialty. “It is considered one of the greatest public health achievements of the 20th century.”

Polio, now eradicated in the United States thanks to widespread vaccine use, paralyzed more than 15,000 people annually in the early 1950s. It reached its peak in 1952, with 20,000 cases, leaving large hospital wards filled with patients on respirators.

“Following vaccination efforts, there were fewer than 100 new polio cases in the U.S. in the 1960s and fewer than 10 in the U.S. in the 1970s,” McLaine reports. According to the Centers for Disease Control and Prevention (CDC), there have been no polio cases originating in the United States since 1979. “My husband was actually involved in the vaccine clinical trials in the Pittsburgh public schools,” McLaine says, “so this is all within our lifetime.”

Notwithstanding the success of vaccination and immunization programs, there can be barriers to widespread patient immunization, and nurses often find themselves on the front lines of these efforts. In these situations, facts and preparation can help health care professionals to protect patients and communities, McLaine says. “It’s really important to provide education and let people know not only about the vaccine, but also about the disease itself.”

The challenges nurses face promoting immunization in clinical and public health spheres vary, from misinformation to complacency to fear. This year, the World Health Organization (WHO) named vaccine hesitancy to its list of 10 threats to global health in 2019, up there with noncommunicable diseases like diabetes and cancer, antimicrobial resistance, and the potential for a global influenza pandemic. According to
the CDC, vaccine hesitancy can take many forms, including mistrust of the vaccine, fear of pain, or parents thinking a vaccine is unnecessary because their children are healthy or not at risk.

In perhaps its most well-known form, vaccine hesitancy relates to a purported link between the measles-mumps-rubella (MMR) vaccine and autism, a connection that has been refuted, McLaine says. “More than 25 articles have been published since 1999 confirming that there is no link with autism or autism spectrum disorder,” she explains. The most recent was published in the Annals of Internal Medicine in April and concluded that “MMR vaccination does not increase the risk for autism, does not trigger autism in susceptible children, and is not associated with clustering of autism cases after vaccination.”

Recent concentrations of measles cases in Baltimore and New York show that outbreaks can flare up in densely populated areas. Getting many people in the community immunized is a necessity for protecting against such incidents, a concept known as herd immunity, McLaine explains.

“Herd immunity is important because some people, like young infants and those who are immunocompromised, cannot be vaccinated, and measles is extremely contagious — nine out of 10 people who are exposed to it and are not protected against it will contract the disease. To protect the population, you need to have 92 to 95 percent of the people immunized.”

In an editorial published by CNN in April, Tedros Adhanom Ghebreyesus, WHO director general, and Henrietta H. Fore, UNICEF executive director, wrote, “Ultimately, there is no ‘debate’ to be had about the profound benefits of vaccines. We know they are safe, and we know they work. More than 20 million lives have been saved through measles vaccination since the year 2000 alone. But children are paying the price for complacency.”

WHO figures show that prior to the introduction of the measles vaccine in 1963, the disease killed 2.5 million people annually, and the authors point out that measles still causes 100,000 deaths globally per year. The WHO reported that measles cases worldwide were up nearly 300 percent year over year for the first three months of 2019.

Ann Felauer, DNP ’18, RN, CPNP-AC/PC, assistant professor and director of the Doctor of Nursing Practice pediatric nurse practitioner acute and primary care specialties, notes that another common objection to vaccines is the quantity that is administered.

“Sometimes families will come in and say, ‘You know what, that’s a lot of vaccines, especially between the ages of 2 months to 18 months. Can we slow them down, or do one at a time?’” Felauer explains. “The child might be getting four different shots, and there are a lot of combination vaccines, and they’ll say they don’t want to overwhelm their immune system. That is a misconception. The reason we give the vaccines like we do is because we need to develop the immune system further. Rather than overwhelming it, we’re trying to help it work.”

Felauer recommends nurses reassure families that the vaccines protect young children against harmful illnesses and educate them about the illnesses and how each vaccine builds upon previous administrations.

“Share with them that our goal is that their infant be happy and healthy, explain what we can do for pain control and how they can support their infant during and after the immunizations,” she says. “If the family is still hesitant, we can work with them to come up with a plan that will keep the infant on schedule.”

The human papillomavirus vaccine (HPV) is another case where misinformation can blur the picture, Felauer says. “I think parents assume that HPV is associated with having sex, so why should they give the immunization now? If the child is not having sex and therefore will not get HPV at this time, let’s wait to give it when they start to have sex,” she says. “One reply to this is: Do you put your seatbelt on right before you have an accident?” The HPV vaccine prevents the most common causes of cervical, head, and neck cancer, Felauer explains.

The young are not the only ones at risk from vaccine-preventable illnesses. Barbara Resnick, PhD ’96, RN, CRNP, FAAN, FAANP, professor, Sonya Ziporkin Gershowitz Chair in Gerontology, and co-director of UMSON’s Biology and Behavior Across the Lifespan Organized Research Center, says she sees less emphasis on adult vaccine administration, since vaccination requirements are reserved for children.

“Older adults can move into long-term care facilities without evidence of vaccinations. There is also less public health focus on adult versus children’s vaccinations,” Resnick says. “Older adults, who are frailer, may well be immunocompromised, and they are at greater risk for bad outcomes associated with flu and pneumonia. Those vaccines are critical for older adults.”

For this population, vaccination issues can be addressed during the annual wellness visit, Resnick says. “There are a variety of myths that come up. The varying effectiveness of the annual flu shot is one of them,” she explains. “The fact is, no vaccine is 100 percent effective, but even if the flu vaccine is 50 percent effective or 25 percent effective in a given year, it’s still going to decrease your risk of getting the flu, and it will also decrease the symptoms associated with the flu.”

Inflammation at the site of an injection is another concern Resnick hears from patients. “That risk is very, very, very small,” she says.

In the gerontological population, there is particular risk for another disease, shingles, which increases with age and with exposure to chickenpox, even if that exposure occurred significantly earlier in life. Shingles is a painful illness that can require many weeks for recovery. Thankfully, Resnick reports, a new shingles vaccine, Shingrix, has come on the market. “It’s amazing. It’s about 90 percent effective against getting shingles,” she says.

An extreme case that sometimes occurs with older patients — a situation that can be fraught with emotion — is when they refuse vaccines because they wish to die from a disease, Resnick explains. “What we do in these cases is explain that flu or pneumonia may not kill you, but it can result in a hospitalization and a decline in function and worsen your quality of life,” she says.

Resnick’s work in recent years has involved combatting these challenges and finding ways to maximize immunization in adults. “Behavior change and implementing health promotion interventions, particularly in long-term care settings and in the community, is important,” she explains. To assist with this, ICAMP was developed by the National Adult Vaccine Program, a multi-stakeholder, industry-supported collaboration under the aegis of the Gerontological Society of America. The ICAMP provides education for health care providers to learn skills and create action plans to implement changes in their organizations that will boost the number of immunized adults.

When interacting with families or patient populations, information is key, McLaine asserts.

“There’s a lot we can do to expand access, but it’s really important to educate and to let people know what the facts are,” she says. “I think there has to be an ongoing dialogue, with active outreach and tracking, meeting people where they’re at, and making it very clear how important these vaccines are.”

We asked our experts and consulted the Immunization Champions, Advocates, and Mentors Program (ICAMP) about the best ways nurses can educate patients and their families about the importance of vaccines, even when facing mistrust and hesitancy. Here are some of their tips:

Inform the patient rather than asking. For example, say “We’re going to go ahead and get you immunized today.”

Be a role model

Say “I got my vaccine today, so let’s get yours taken care of.”

This way, as individuals are admitted to any institutional setting, an order for appropriate vaccines — at least flu and pneumonia — is available.

Discuss them with every patient at every encounter.

Determine what the barrier is

Then find a way to work around it. Often, you can refute a myth or misinformation by providing straightforward facts.

Be confident about the value of the vaccine

If you as a provider are hesitant, your patient will be, too.