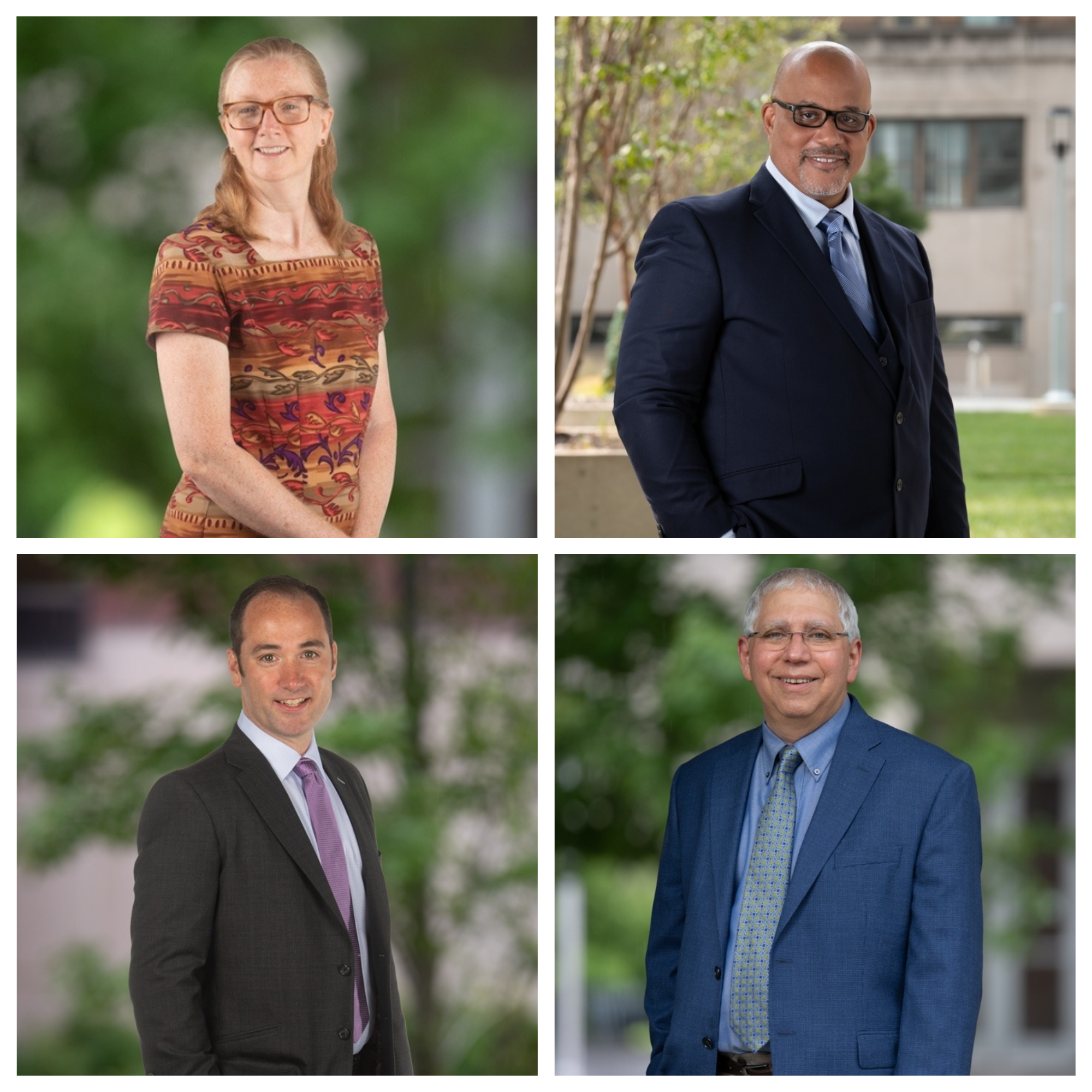 Every fall, UMB recognizes the outstanding work of its faculty and staff with awards for Entrepreneur, Public Servant, Researcher, and Educator of the Year.

Every fall, the University of Maryland, Baltimore (UMB) dedicates one week to commemorating its rich history and celebrating the future we’re building together. Among the highlights of Founders Week is recognizing the extraordinary work of our faculty and staff, which is especially crucial during these uncertain times due to the COVID-19 pandemic.

Four awards are given every year, each signifying outstanding accomplishment in one facet of our mission. Here are recipients of the 2020 Founders Week Awards, the first of which has been renamed in honor of late UMB President David J. Ramsay, DM, DPhil.

Learn more about Founders Week and this year’s virtual Gala.

In addition to his School of Medicine (SOM) faculty position, Dr. Scalea is a multi-organ transplant surgeon and director of pancreas and islet cell transplantation at the University of Maryland Medical Center (UMMC). During his four years at SOM, he has cultivated impressive collaborations in research, education, and entrepreneurism.

After conceptualizing, designing, coordinating, and testing technologies that made the shipment of human organs by unmanned aircraft possible, Dr. Scalea’s team performed the first transplant of a human organ transported by drone in April 2019, drawing national attention and acclaim. He was the project leader and one of the surgeons who performed the kidney transplant at UMMC.

Dr. Scalea, a 2007 SOM graduate, founded Transplant Logistics and Informatics, a data analytics startup that was restructured in 2020 into MissionGO. The Baltimore-based company aims to commercialize life-saving technologies through logistics and supply chain innovations. MissionGO has spun off a company, MediGO, which is working to produce software/hardware solutions to improve organ tracking and monitoring.

Dr. Scalea was recruited to SOM in 2016 to direct the pancreas program and tasked with improving access to pancreas care. Using a multidisciplinary and entrepreneurial approach, his team increased patient volume by more than 200 percent in less than 24 months while improving quality of care and providing an annual revenue increase of $10 million.

Dr. Scalea’s efforts have led to multiple state, society, and National Institutes of Health grants and three patents. He also has written more than 65 peer-reviewed publications and 10 book chapters.

Public Servant of the Year

Through teaching, research, and public service, Professor Sweeney has dedicated her career to helping society’s most vulnerable people. Since joining the Carey School of Law in 2004, she has taught students to combine legal theory with practice and given them opportunities to help poor or marginalized members of the community who lack access to justice.

Many prospective students identify the Immigration Law Clinic as a chief reason for applying to the Carey School of Law, and current and former students rave about Professor Sweeney’s teaching methods and mentorship.

As head of the clinic, she works tirelessly on behalf of clients facing a range of legal issues that place their ability to remain in the United States in peril. Professor Sweeney is highly respected for her innovative client advocacy and work on broader issues impacting immigrant communities, and she strives to educate the UMB community and the public at-large about these issues.

Beyond the clinic, Professor Sweeney has collaborated with nonprofits, argued cases before state and federal courts, and is an active member of several organizations that assist immigrants including the National Immigration Project of the National Lawyers Guild, where she is a board member.

Researcher of the Year

Dr. Magaziner is a leading scholar on the epidemiology of aging whose research focuses on three interrelated areas to improve the quality of life of older persons: the consequences of hip fracture, health and long-term care, and methods for studying older populations.

Dr. Magaziner’s work on hip fracture recovery has earned two consecutive Method to Extend Research in Time (MERIT) awards from the National Institute on Aging (NIA), given to the highest-quality researchers. He has been funded by NIA since 1983 for studies on hip fracture, dementia care, and research methods. He also directs the Claude D. Pepper Older Americans Independence Center.

In 1986, Dr. Magaziner started the Division of Gerontology within the Department of Epidemiology and Public Health and has risen to leadership positions with several campus programs on aging, many of which he helped to create, including the Gerontology Doctoral Program and the University of Maryland Center for Research on Aging in the School of Medicine.

Dr. Magaziner has served in leadership positions with numerous local, national, and international groups, including the Fragility Fracture Network, of which he is currently president; the Maryland Commission on Aging; and the Gerontological Society of America. He has published extensively in internationally recognized journals and is deputy editor of The Journals of Gerontology: Medical Sciences.

His research has been recognized with awards by the Maryland Gerontological Association and the Gerontological Society of America. These awards show the impact of his research and the respect that Dr. Magaziner has earned from researchers around the world working on hip fracture recovery.

Educator of the Year

Professor McClain’s passion for teaching and education manifest in his classroom performance, his scholarship and research interests, and his administrative leadership. These qualities have led him to be regarded by his students and colleagues as one of the best teachers at the Carey School of Law.

His students in courses such as Bar Exam Preparation, Introduction to Contracts, and Commercial Law appreciate the genuine rapport he forges with them and his investment in their success. His colleagues appreciate his willingness to offer teaching guidance. Professor McClain helped lead the law school’s summer series on improving faculty pedagogy for remote teaching due to COVID-19, and before the pandemic, he offered similar programs in general.

Professor McClain, who graduated from the Carey School of Law in 1995, is passionate about increasing diversity in the law profession. As associate dean for diversity and inclusion, he helps develop and implement an inclusion and equity strategy by participating in training, student recruiting, organizing diversity programming, supporting marginalized students, and managing crises.

Professor McClain is a leading expert on the impact of implicit bias and stereotype threat on the academic progress of students from groups traditionally under-represented in law school. He has published two law review articles on the topic and is writing a book, Guide to Law School for Minority Students. He has earned a national reputation for his work and has given dozens of presentations and trainings.

Professor McClain’s energy, enthusiasm, attitude, and commitment are a true testament to his teaching methods and his desire to see his students and colleagues succeed.