UMB Steps Up to the Challenge in Ultimate Mileage Battle 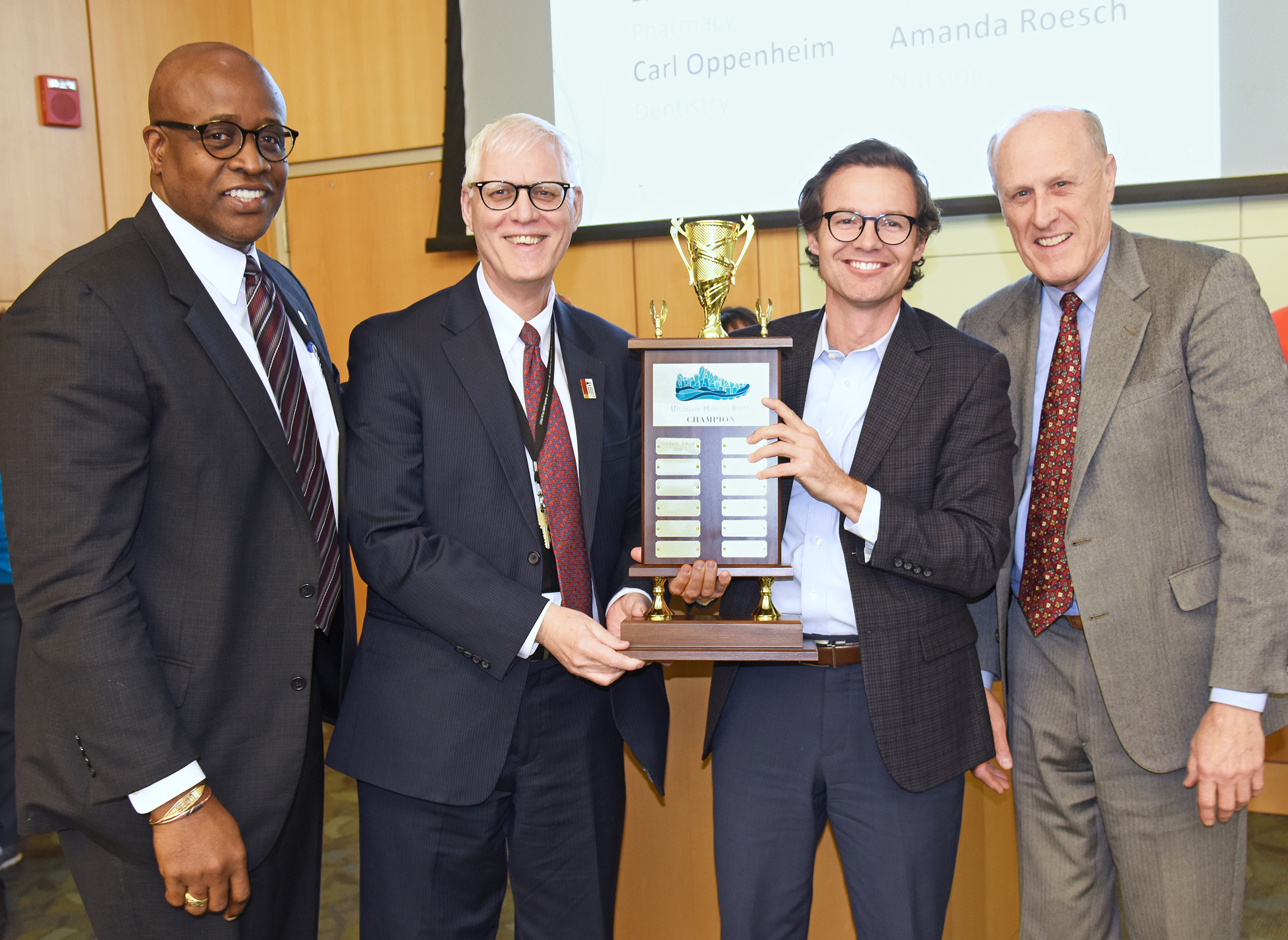 Participants log more than 233 million steps over month and a half in initiative that’s part of Launch Your Life’s workplace health and wellness efforts.

As part of its mission to promote workplace health and wellness, the University of Maryland, Baltimore’s (UMB) Launch Your Life program sponsored an inaugural step challenge this fall with a familiar acronym: the Ultimate Mileage Battle.

Teams from each UMB school and a Universitywide group, the Campus All-Stars, tracked their steps from Oct. 14 to Nov. 27, logging more than 233 million steps, which translated to 91,375 miles, according to Jina Bacchus, work life strategy specialist in the Office of Human Resources.  Bacchus called the Ultimate Mileage Battle a “great success” and handed out team and individual awards Dec. 5 during the President’s Quarterly Q&A at the School of Pharmacy.

“We hope that this challenge will help as you instill healthy habits into your lifestyle and that you don’t stop here with your health journey,” Bacchus said. “With our well-being efforts, we aim to foster a healthy culture and work environment at UMB.”

The Ultimate Mileage Battle recognition concluded the Q&A, the final one in the nearly 10-year term of UMB President Jay A. Perman, MD, who will become chancellor of the University System of Maryland (USM) on Jan. 6. Perman noted his impending new role as the leader of USM, describing it “a humbling privilege” and promised he’d have more to say about it during a celebration of his presidency on Dec. 12 at the SMC Campus Center.

Regarding the Ultimate Mileage Battle, Perman, who earlier had taken questions from the crowd of 100-plus, recalled that he helped inaugurate the step challenge Oct. 14, when he led a large group on a walk that started at the School of Nursing (SON), looped down to the Ridgely’s Delight neighborhood, came back up Penn Street, and finished back at the SON Lawn on Lombard Street.

“I’m happy to say that I took part in the kickoff, walked a mile with everybody, then got out of there,” Perman joked before the award winners were announced. Bacchus was appreciative of the president’s commitment to workplace wellness.

“We thank you, Dr. Perman, for your enthusiasm and vigor and for your leadership of these types of programs. We also thank all the UMB and school leaders who supported the challenge,” Bacchus said. “If we’re healthy, we can all excel at UMB. And so I hope everyone gets this message.”

Because the Ultimate Mileage Battle teams varied in number, the metric used to calculate the winner was average daily steps per walker, and the Graduate School came out on top, with its participants averaging 8,548 steps per day, and left the Q&A with a fancy new trophy. “They were very steady with their steps, and they worked very hard to achieve this,” Bacchus said.

The School of Social Work (8,347) took second place, and the Carey School of Law (8,125) was third. The walkers who averaged the most steps per day for each team were as follows:

Crockett, executive director, Campus Life Services and the SMC Campus Center, recorded the most steps overall with 1,260,868, averaging about 11 miles per day. Awards also were handed out for each team’s most improved walker, the ones who showed the highest daily step average increase between the first and last weeks of the challenge.

Launch Your Life had a number of collaborators on the Ultimate Mileage Battle, including URecFit, which offered participants a free two-month walking track membership; the UMB Staff Senate, which provided marketing support; the School of Nursing’s Fit and Fun group, whose 2018 step challenge inspired the Universitywide effort; and “wellness champions” who helped to recruit participants.

(View more photos from the Q&A.)

Also at the Q&A, Matt Lasecki, SPHR, associate vice president, Human Resources, shared results from the campus climate and engagement survey of UMB staff and faculty that was conducted last Feb. 18 to March 19 in collaboration with the Gallup organization. A follow-up to a similar 2016 survey, the 2019 edition included 53 questions organized into seven indices — engagement; inclusivity; honoring diversity; relationship; input on decision-making; organizational values; and safety — as well as six new questions about gender self-identification and sexual violence.

“Our organizational values scores show that there is strong identification with our core values at the University,” Lasecki said. “We also saw our diversity index was fairly high, so that is encouraging. Overall, I would say that we’ve made meaningful progress, but there is work yet to be done.

“This data becomes very useful when you can drill it down more specifically to a school level or to an administrative department level,” he added. “So our next step will be to go out to the schools, share their information, and help with analysis and action plans for improvement.”

On another topic, Aisha Samples, MS, gave an overview of UMB’s new Workplace Mediation Service (WMS), which was formed with input from the offices of Accountability and Compliance, Human Resources, Ombuds, and University Counsel.

“If you have a conflict in the workplace, mediation is a forum where you can discuss concerns with the other person or people who are involved, and it provides an opportunity to develop a plan going forward,” said Samples, program specialist for WMS. “The mediator helps individuals involved in a conflict have a conversation and also facilitates the mediation. Mediation may result in an agreement or a better understanding about the situation or both.”