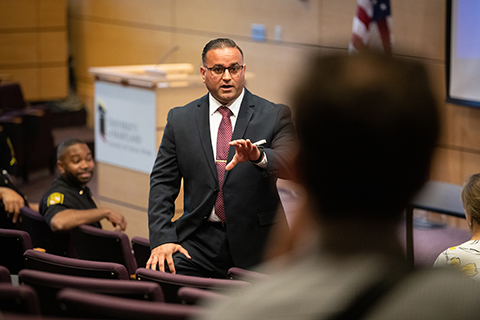 When Sgt. Stefano Belmonte welcomes a new officer to the New York Police Department’s (NYPD) Homeless Outreach Unit, the first thing he tells them is that homelessness is not illegal.

“It’s very important to explain that to new people who come under our command,” says Belmonte, a 19-year NYPD veteran. “When you see homeless people on the street, they are allowed to be there. And begging is protected by the First Amendment. So it’s not illegal for someone to sit outside a building or lie down in front of it; they are allowed to do that.”

These were among the observations he brought to the University of Maryland, Baltimore Police Department’s (UMBPD) second Homeless Outreach Symposium. He gave a 50-minute overview of his department’s efforts to aid the homeless, then took questions from the audience at the School of Social Work Auditorium on Sept. 19.

Belmonte explained that in 2015, under a new mayoral administration, NYPD’s mission with the homeless shifted to a non-enforcement policy that has cut arrests among the population from 2,000 a year to zero. Many of the arrests had come from police working the transit sector, as homeless people would be sleeping inside subway cars or on a station’s platform or mezzanine.

“A person would be approached and offered the aid and social services available for homeless individuals,” Belmonte says. “If they refused that, they were in violation of transit rules and regulations. If they couldn’t provide an ID, they would be brought to the station house and get fingerprinted, photographed, lodged, and brought to booking.

“A judge would see them, they would get arraigned, and the judge would sentence them to time served. They would get out by later that evening and head back into the subway system and start the process all over again. It was a revolving door, taking people from the street, putting them through the system, and letting them out the same day.”

Belmonte has been involved in NYPD’s homeless outreach program for nine years, including the past three as the Homeless Outreach Unit’s (HOU) administrative supervisor and training sergeant. He said his unit’s primary focus now is to collaborate with governmental and non-governmental agencies to help homeless individuals, offer them access to much-needed social services, and connect them with a shelter, especially in case of cold weather.

“If I see that someone is not properly dressed for the weather — say it’s 32 degrees or below and they’re wearing a T-shirt and have no shoes — I can’t just walk away from that person,” Belmonte says. “We have the responsibility to preserve human life.”

Belmonte said collaboration is the key to homeless outreach, and his PowerPoint presentation listed 13 agencies or entities that partner with his unit. Officer Yale Partlow, UMBPD’s outreach and crisis intervention liaison and a key member of its Community Outreach and Support Team that interacts with the homeless, said his unit is working toward forging those types of relationships as well as getting UMB students involved.

“We’re in the process of expanding the number of providers we work with,” Partlow says. “Here at UMB, we have access to a lot of resources that give us an advantage. We have School of Social Work students who need to meet certain field requirements to graduate, and we have School of Nursing students who help in various initiatives. We’re also looking at having social work students who are overseen by licensed social workers participate in street outreach with us.

Partlow also thanked UMBPD Chief Alice Cary, MS, for allowing members of the department to be innovative in their policing practices as the department transitions to a community engagement-based philosophy.

“This symposium is part of a larger community engagement initiative as we continue to build our own crisis intervention program and look at how other agencies across the country operate in this area,” Partlow says. “We are working to break the mold, expand the roles of law enforcement, and explore new and humane pathways to serve some of the most vulnerable members of our society.”

During the Q&A session, Belmonte reiterated NYPD’s mission when asked whether leading the homeless away from living situations such as an outdoor encampment disrupts their sense of self and community.

“Our end game is to get homeless individuals off the street and into a shelter,” he says. “In a shelter, they can get social services to help them, especially if drugs or alcohol are involved. And they can get detox or mental health services if needed.

“We don’t want individuals to sleep on the street. We want people to live in homes. We are trying to get them to go through the steps, the process, the social work to accomplish that goal. And we give them this message: ‘You don’t need to live on the street.’ ”